“Boxing found me” with those Words, Yvette Raposo started talking about her journey with boxing in Canada. As a child, she describes herself as a chubby one. In her teenage years, she wanted to do something about her body image, and that is where boxing came to play for her. But boxing wasn’t where it all started, At the age of 17, Raposo wanted to be a personal trainer, and she started working at a gym that had a sophisticated boxing club. While being there taking her training course, she developed an interest in boxing and began training. What started as a journey to improve self-image turned into self-empowerment and discovering inner strength, and boxing was what helped Raposo unfold it all.
“Initially, what started to be physical, physically changing my body, and then I was pretty in tuned enough to realize that actually became an emotional and mental journey just as much as it’s physical. What boxing gave me is to actually feel powerful, feel purposeful without overly focusing on how my body looked” 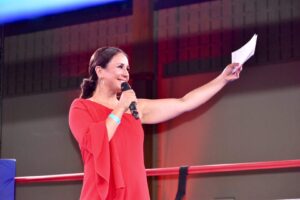 Raposo considers herself lucky to have mentors she can call and ask for guidance, so she turned to them for advice; one of them is long-time ring announcer Pierre Bernier, who helped guide her and gave her advice. One thing Bernier said, and it stayed with Raposo to this day that “the cream always rises to the top” Raposo took this advice and tried her best to excel and thrive as a ring announcer. She then took a storytelling course, voice lessons, and improv classes and relied on her experience in the ring and passion for boxing to help her on that first day. From that day on, Raposo continued to work as a ring announcer.

A trendsetter
Pierre Bernier, a long-time ring announcer and one of the first Canadian ring announcers to be on HBO and many of the major world champions, sees Yvette as a trendsetter. To him, she knows the game, and she has the talent and passion for it.
“Yvette is very much a go-getter and very passionate about boxing, and that’s one thing we have in common.”
Bernier doesn’t see any difference between a male ring announcer or a female as long as there is passion, talent, a sense of performing, and they enjoy what they do; both can excel in it, and to him, Raposo represents it all.

“I think Yvette is a great example of that; I think first and foremost, she really knows the fight game. She has fought herself, and she is a trainer. I think it comes naturally to her” 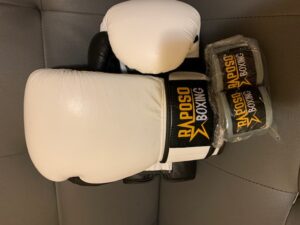 Bernier has always been a boxing fan, and he always wanted to be a part of the boxing world. Among the many options he had, he chose to be a ring announcer, which seemed a natural transition to him. While some might see boxing as a brutal or even violent sport for Bernier, it’s a sport that is different from other sports because boxers put their lives on the line every day.
“When you see two people that are willing to go in there and just give everything they have, it takes intestinal fortitude to do that.”

From boxing to public speaking
Yvette is now a public speaker and a teacher at the University of Toronto. Through her speeches and teaching, she tries to motivate people and help them find their inner powers. She does it through storytelling because She thinks this is how we learn about ourselves and others. Raposo sees storytelling as a powerful tool to deliver her message of empowerment, but even in her public speaking, she doesn’t stray away from boxing. She incorporates boxing into it whenever she tells a story. Because that’s how she sees boxing; she sees it as a form of storytelling which is an aspect that she loves about boxing
“In boxing, it is very much about the stories; you have two stories, two people, their lives. Everything that they worked for towards come down to this one event, one moment. Then you have two stories that merge into one story, which is the night of the fight”

When Bernier first heard her as a public speaker, she blew him away with her work. Although he says that he always knew she was good but seeing her speak, he was very impressed.

When Raposo looks back at her career, she wishes ring announcing felt like an option to her. The lack of female ring announcers at that time made this dream feel unrealistic to her. However, as the times have changed and more females have become ring announcers, it started to feel like a realistic goal for many women. Her advice to any upcoming boxer or ring announcer is to be methodical and strategic about their career and carve out a place for them in a world where social media has given the option to everyone to create a case for themselves.
“Be very strategic in how you promote yourself, your brand awareness; all of these things count.”