“Aim to drink less,” advises the Canadian Centre on Substance Use and Addiction.

The CCSA reports say that individuals who consume seven or more standard drinks pre-week are at an increasingly high risk of injuries and violence. According to the CCSA, a standard drink means beer or a cider containing 5% of alcohol, wine or spirits such as whiskey, vodka or gin, etc., containing 12% and 40% alcohol, respectively. 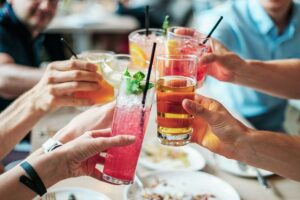 This new report replaces the 2011 guideline Low-Risk Alcohol Drinking Guidelines, which counted ten drinks a week for women, with no more than two drinks a day most days and 15 drinks a week for men, with no more than three drinks a day most days as low-risk.  The centre also said that the new report aims to inform people about their drinking patterns and help them make educated decisions about their health.

Candian Centre on Substance Use and Addiction’s CEO Rita Notarandrea said on the new guidelines, “The current Low-Risk Alcohol Drinking Guidelines are a vital tool to support Canadians in assessing their alcohol consumption and in making informed decisions about drinking. Since they were first developed in 2011, the evidence on the impact of alcohol on health and its contribution to social harms has advanced considerably.”

The updated report also includes sex and gender alcohol demographics. It states that, though women are more susceptible to harm and injuries because of heavy alcohol use, they do not generally drink heavily.  Men, however, are more prone to heavy drinking and are likely to be linked in an alcohol-impaired driving collision, according to CCSA.

For reaction to the new report, S@Y News reporter Suniti Arora talked with Seneca students at the York campus. Arora reports that a female student said that “she only drinks on special occasions” and is not an avid drinker. But when she talked with a male student, he said, “People have been drinking for a long time, even more than the suggested amount, and they are healthy,” and “it (the guideline) is not going to stop me.”

CCSA’s report concluded that the report is suggesting a “cultural shift” and “an environment supporting healthier and more informed-behaviour choices around alcohol is an absolute pre-requisite
for a healthy society.”

“The updated guidelines have the potential to form an evidence base for future policy making and public education, but most importantly, they will be a real-world tool for Canadians,” concluded CCSA’s CEO Rita Notarandrea.

Right on his rooftop, Max Meighen harvests the crops needed for his restaurant and brewery, Avling. His rooftop garden is over 4,000 square feet. There, he harvests crops like tomatoes, lettuce, and peppers to be [Read More]

A summer without entertainment activities is like lemonade with no lemons — there’s no point. COVID-19 is really bumming people out. No new movies in theaters. No concerts. It doesn’t feel like summer without being [Read More]

Is your ex “bugging” you? Gift them a “buzz”, thanks to the Toronto Zoo