Seneca’s basketball women’s and men’s team both got great victories over the Centennial Colts on Tuesday Night at the Newnham Campus. The women’s team played a close first quarter down by two heading into the second quarter and then that’s when the game started to steamroll for the Sting outscoring the Colts 25-6 in the second quarter. Throughout the rest of the game Seneca maintained their comfortable lead winning the game by 13 points with the final score being 65-52.

Now to be fair, Centennial did only have two players on their bench which meant that 2 of the starters for the Colts played the entire 40 minutes of the game. But it still doesn’t change the fact that Seneca won the game and took advantage of the opportunity of the shorthanded Colts. Big shout outs to Tsinat Geremew who finished with a double-double dropping 15 points and 12 rebounds, Tianna Leveridge shooting 50% from the field dropping 17 points, 9 rebounds and Emily Balkissoon raining 3s from beyond the arc shooting 44% from the 3point range dropping 16 points and 7 rebounds. The women’s team have now won back to back games improving there record to 3-5. They face Durham at home next Tuesday at 6pm. 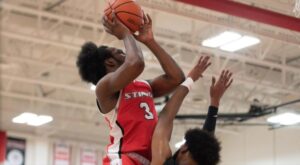 The men’s team also got the W against the centennial colts by 9 points with the final score being 71-62. The boys were well in control throughout the game with a comfortable 10-point lead. Seneca’s bench outscored centennials bench by 32-11 which was one of the key factors to a good victory. 4 players on Seneca finished the game with double digits. The scoring leader on the team was Marcus Bonnick who dropped 14 points, 6 rebounds and 2 assists. The other 3 players who had good games were Tafari Black, Jordan Anderson and Raeshawn Washington who came off the bench playing 24 minutes the most on the team. This was a full team effort win against the colts and now the sting they still remain undefeated at home with a record of 5-0 there total record improves to 8-2. There next game comes against Durham at the Newnham campus next Tuesday January 17th at 8pm.