Seneca College student Ridhi Sharma is not happy with changes coming to the TTC. The transit system is raising fares while reducing service. Sharma relies on transit to get to school and says, “I think it’s really bad as I’m a college student and I have to reach college at time and if the trains will be late, they will be overcrowded as well which will make people frustrated and tired and it will not be possible for me to reach college at on time or I have to leave super early in order to be on time. It is a really bad thing.”

TTC has announced that 2023 will bring many changes including the fare increase and cuts to service. This is the first time TTC is increasing its fare since April 2019.  On Monday, the TTC Board conducted a meeting to discuss the budget proposal and few other changes. And as a result, there will be an increase of 10 cents effective Monday, April 3. This increase is only targeted for single adult and youth fares.

The reactions are mixed as people think it is going to benefit them in long term as said by Chris,” I think its going to be good because they really need it and TTC has been debt and a lot people are abusive towards the system and the people working under TTC. So I think not only is it good for us but them as well because in long term, in their fee, they’ll be able to help us”.

And when it comes to the cuts in service, TTC has declared that there will be a 9% less service in 2023 than pre-pandemic levels. This 9% deduction in service will lead people to wait up to 10 minutes rather than 2-4 minutes for a train.

An activist group, TTCriders has criticized the moves while releasing a statement,”Mayor Tory has proposed deep budget cuts that will leave transit users waiting longer for their bus, streetcar, and subway. And when their TTC vehicle arrives, it will be more crowded.” A lot of people are concerned about safely due to less service, according to Reece on TTCriders twitter,”Less subway service in Canada’s biggest city is going to put the ridership recovery on ice and likely increase safety concerns. This is bad.” 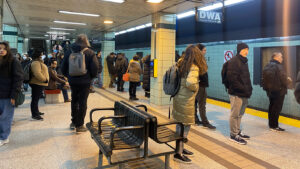 Many young people are really worried about the higher fares. Also, students and people with jobs are really concerned as the cuts in service  will make them wait longer than usual which will further lead to more travel time for them.

Social media is filled with people criticizing this change.  Alisha Kelly says,” I personally think that the TTC is already very expensive and late and slow and these new change will discourage people to take the transit and will upset them.”