The Slamdance Film Festival, following their motto “by filmmakers, for filmmakers”, every year since 1995 gives the opportunity to new and independent filmmakers to share their films.

This year The Slamdance community received 1,579 submissions from first-time directors with budgets of less than $1 million USD. From all the submissions they received only 23 were chosen to be premiered at the festival, there are thirteen that are world premieres, six North American premieres and four U.S debuts. 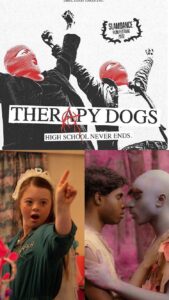 This year’s lineup has three films that come from Canada; “Therapy Dogs” “Honeycomb” and “Retrograde” as well films from other countries including Germany, Australia, Iran, China, Italy, Poland, and the UK among others.

The Slamdance Film Festival 28th edition will be presented in a virtual form just like last year.

Even though at first it was announced it would be presented in a hybrid format, because of the rise of the omicron variant of Covid the festival has changed its 28th edition start date and cancelled the in-person event.

Peter Baxter, Festival President and co-founder said in a statement “Although we are disappointed that we won’t be able to participate in the communal, in-person experience, we know we can create a unique festival experience for all of our filmmakers through Slamdance’s online platform,”

The festival will start in its virtual format from January 27th to February 6th. To have access to the festival streamings, participate in Q&As, events and discussions there is an all-access virtual pass that you can buy on the Slamdance website and find more information about the festival.