An 83-minutes-long movie released by the high school student Ethan Eng got will be shown in the Slamdance Festival taking place online from January 27th to February 6th, 2022. Founded in 1995 by Peter Baxter, the Slamdance Festival aims to highlight emerging talent. Ethan found out by surprise that his film will be at the festival, ” I found out over the phone while I was working at the hospital. At that time I had given up on any future for that movie, I was ready to start a new beginning. So when I got the call, it felt like everything rushed back to me. I was back in high school and the dream never died. I still can’t believe it. “ 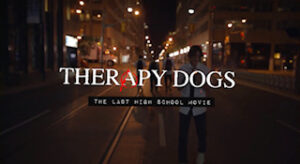 Ethan Eng staged his friends and introduces his audience to one year of high school at Cawthra Park Secondary School in Mississauga. The film shows daily high school life and demonstrates the struggles of high school students who need to handle schools, friendship, their future. The movie also shows the “fun” part of their life with all the parties, smoking, drinking, and proposals. “Therapy Dogs was Justin’s idea. He’s my best friend and we went through everything together making this. In a way we were each other’s therapy dogs. It’s what our friendship was in those tough times.” told us, Ethan.

He is the director of the film and also the screenwriter with Justin Morice. “Shy Kids” is the producer, Matthew Miller, and Matt Johnson are the executive directors. In the cast we can also see: Kevin Tseng, Kyle Peadock, Mitchell Cidade, Sebastien Neme. They were all in the same class in 2019.

On Wednesday, January 19th, they shared a 2:12 minutes trailer on Instagram and the video has already been seen 2,334 times. https://www.instagram.com/tv/CY7TdHKlVw2/?utm_medium=copy_link