What Holly had to Cover

What Covid Rules Were Implemented? 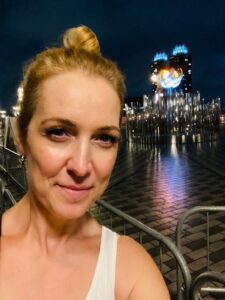 Holly and Editor in Suite

With the Beijing Olympics on the horizon, Covid-19 is still a major concern with the new omicron variant rapidly spreading. Former sportscaster, Holly Horton was given the opportunity to go and cover the Olympics in Beijing and decided to turn it down.

Holly attended the previous Olympic games in Tokyo as an OBS (Olympic Broadcast Services) reporter for her first Olympic games. Holly was responsible for announcing the headline package that went on at the beginning of every hour. It was stressful for her as she would have to make sure she is done and finished with her headline package before the hour is up and time to start on the next. Being a part of the OBS means Holly had to cover all of the Olympic events, making sure to cover them all equally wheather she was familiar with it or not. One of the challenges faced with having to cover all of the various events was having to remember the names of every player for the event. Holly said “I probably uttered a hundred names a day I've never uttered before.”

There were a number of Covid -19 rules implemented at the Tokyo games as they were making sure to take extra precautions. They knew everyone who decided to be at the games was taking a risk of contracting the virus. Especially given the fact that Japan was in a state of emergency at the time and most of the residents did not want the Olympics taking place. There were many documents you had to provide to even be allowed into the country. You had to provide multiple time sensitive Covid tests. And once you had arrived into the country you were advised to do a “soft quarantine” which consisted of you staying at your hotel and venue of choice.

Although Holly enjoyed her time last summer in the Tokyo Olympics, she made her decision to turn down the opportunity to go back to the games in Beijing this winter. It was an extremely difficult decision, and consisted of a lot of back and forth to come up with the ultimate conclusion. Holly said being away for that month was very tough on her family but especially her husband. Holly’s initial instinct was to go to Beijing, and After speaking with her boss and having a conversation, she was convinced to go and did indeed sign the contract. Holly is the type of person to “Say yes when presented with an adventure and figure out the stuff afterwards.” But upon signing the contract Omicron hit, and started to spread quickly. It was the “unknown” at the time and all we knew was it was more transmissible. With all of that happening, Holly simply did not want to take the risk as she has a young child who is unable to be vaccinated yet. Multiple questions arose for her like; “what happens if my son gets it, and how is my husband going to handle that?” and “what if I got sick in China?.” Therefore, Holly was very uneasy with all of the new concerns.

For Holly it was family over everything, and their safety was number one priority to her. She is however open to going back to the Olympics in the future if the opportunity presents itself, and Covid-19 is not as big of a factor as it is now.