It is extremely likely that anyone who has a Canadian phone line has received countless phone calls from random numbers pretending to be an official organization, warning you about being compromised one way or another. They lead with a promise that they are there to help you, but most of us know this game way too well.

It has been reported that the fraudulent business of scammers has increased since the pandemic hit in 2020. A business that allegedly makes hundreds of millions of dollars each year that the Canadian Anti-Fraudulent Center can account for. According to the Canadian Anti-Fraud Center (CAFC), scam calls can be difficult to track down, since the majority of scammers are operating from international call centers that aren’t on Canadian ground. A lot of the phone numbers have been manipulated to appear legitimate to their unwitting victims.

The Findings of The Canadian Anti-Fraud Center (CAFC)

In an interview, Jeffrey Horncastle, an expert from CAFC shed some insight on our current scam epidemic. According to Mr. Homcastle, the pandemic is a huge factor in the recent surge in fraud lately, since it has often left individuals at home and feeling isolated. In his words, he stated, “They may have been going through some financial hardship looking for an investment – or looking for a loan and falling into a trap, a scam trap that way, everything from online shopping to banking online because places were closed or shut down.”

And indeed one of the most popular and common ways Canadians are getting scammed is through Investments, some of the most known investments scams are Crypto assets and binary schemes to name a few. According to the 2017 to 2021 MMF Pitch Offering Breakdown Reports, investments scams contribute to 42 percent of the top scams/frauds reported in Canada. In 2021 there was a total of 2,016 victims of investment scams/frauds in Canada, totalling over 113 million dollars lost. The least common method of scamming in Canada during 2021 was loans, which accounted for 4 percent of the total scams in the country. However, loans racked up over one million dollars in total losses and affected a total of 315 Canadians.

There has also been a steady rise in extortion scams in Canada. The number has massively increased since 2017 and has drastically escalated. In 2017 the total amount of money lost to extortion scams in Canada was sitting at almost 5 million dollars. However, that number has since tripled and in 2021 it was standing at over 15 million dollars in losses and that amount may continue to increase by the end of 2022.

In addition, with Ontario being the most populated Province in Canada, it may come as no surprise that the Province has the highest amount of dollars lost due to scammers. The province collectively lost over 142 million.

dollars to scammers in 2021.With extortion contribution to over 7 million of losses. Other

smaller provinces such as Yukon accumulate about $126,561.13 lost to scammers.

It has also been estimated that roughly about 5 percent of scam cases are reported each year, so that leaves it to the imagination of how much these con-artists actually make. 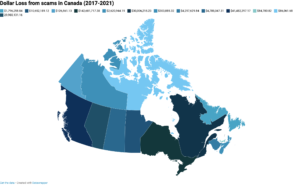 It could be an unimaginable 20 times higher than what is known thus far. Additionally, Statistic Canada has already reported $75.5 million dollars lost to scammers from February 28, 2022, a number set to increase until the end of 2022. Scammers can target any Canadian so it is important to learn how to protect yourself. And there are a few ways for us to combat these numbers; never give out your personal information, conduct your research and learn how to protect your Social Insurance Number (SIN).

Youtube video description -  New and vulnerable International student Farouq Edu talks about his experiences being scammed within his first few weeks of being in Canada.