With Canada making their first World Cup appearance since 1986, The country showcased much of what talent the country entails, but in reality, Soccer is not the most famous sport played in Canada.

There are a plethora of sports teams in Canada, while some teams play in the summer and some in winter, their popularity also changes with the season. But do you know which team is the most popular? While Canada is known for its hockey, the most popular team is not Toronto Maple Leafs. It is Toronto’s Blue Jays! They might not win many games, but they do win the popularity game. Due to the Jays being one of the only teams that normally play during the summer, they bring a lot of tourists and diehard fans to the Rogers Center. The Toronto Bluejays are also the only MLB baseball team in Canada compared to the Maple Leafs which have seven different teams across Canada helping divide some fan loyalty. This Canadian-wide fan support also applies to the Toronto Raptors, the only NBA team in Canada.

(Most popular Toronto sports team for 2022)

What Happened To Hockey?

During April through May, the Toronto Raptors are usually competing in the playoffs, and actually, have a higher pique interest than the Blue Jays, but when eliminated a drastic decrease occurs and the Jays take over for popularity.

The Toronto Maple Leafs follow the same trend as the Raptors gaining a lot of attention going into playoffs, but with constant heartbreaks from elimination, Torontonians focus their hopes on Blue Jays for success.

New Signings For Who?

While comparing the big sports teams on google trends Toronto FC was also an addition. But the sudden rise in popularity was due to the club signing two international Italian players Lorenzo Insigne and Federico Bernardeschi, Insigne a big name for Italian soccer was the captain of his previous team bringing a lot of interest around Canada during the summer of 2022.

When it comes to soccer there are two Major League franchises in Canada and divided loyalties between east and west. Toronto FC has a greater nationwide pull with only Yukon and Vancouver dominating searches for the Whitecaps and close to 50% of searches in Alberta.

According to Angus Reid In 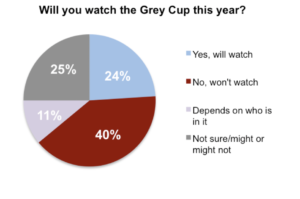 stitute Football isn’t as popular a sport in Canada as it is in the U.S. and it doesn’t help that they play in the CFL which is a step behind the NFL. For Canadians who do watch the CFL, just like the Leafs, fans would have seven other teams to divide their loyalties to.

Sports always bring people closer together but certain sports in Canada are favored more than others.