Amid a pandemic, those in the media have had to come to terms with being laid off. Unifor, which represents both union and non-union Bell Media workers, says a total of 210 employees in the Toronto region were laid off. Despite receiving $122 million dollars in wage subsidy, it was not enough to maintain the jobs of Bell employees, some of whom have worked for the telecommunications giant for over 20 years. Unifor condemned the cut in jobs especially when the telecommunications company that owns it, BCE, forecasts a profitable 2021.

The president of Canadian Association of Journalists (CAJ) Brent Jolly, chose to point out the hypocritical behaviour of Bell. Jolly stated “While we understand wage subsidies were never a fool-proof solution to prevent layoffs, to see shareholders be rewarded while essential journalism jobs get axed is a national disgrace.” In a time where news seems indispensable, it will seem as though satellite cities in Canada will be neglected.

Essential journalism jobs getting axed is a national disgrace 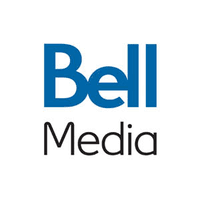 When asked to comment, Bell Media’s director of communications Marc Choma emailed  back a response to the Canadian Press.

“There are further changes in roles, including some departures, reflecting Bell Media’s streamlined operating structure.” He added that “As the media industry evolves, we’re focused on investment in new content and technology opportunities while also ensuring our company is as agile, efficient and easy to work with as possible. That includes programming changes affecting some on-air positions, but I think it’s pretty clear by now that our policy is not to comment on individual employees.”

Internally, Bell Media has also had restructuring. Shortly after Wade Oosterman became president of Bell Media significant changes were made. Layoffs encompassed individuals from a variety of departments. Media cuts were the most substantial as the entirety of the stations at Montreal’s CJAD 800, Hamilton’s TSN 1150, and Vancouver’s TSN 1040 and Winnipeg TSN 1290 were terminated. Popular local AM radio such as Toronto’s CFRB and Montreal’s CJAD 1010 took the brunt of the layoffs. All the stations’ reporters were laid off, effectively ending their storied history.

CJAD cancelled its talk shows starring Jon Pole’s The Night Side, and Dr. Laurie Betito’s Passion. The show The Night Side remained on air for a significant period discussing various topics such as news and politics, and just interested in everyday life, relationship questions and parenting. Topics that are applicable to the everyday person. He had become a staple in Montreal and countless individuals just like him across the country, who made a meaningful contribution were just stripped of their livelihood instantly.

Brent Jolly, also added that “Some of the journalists who’ve lost their jobs have spent 20 years (or longer) with their organizations. Bell’s decision to gut some of these newsrooms with a simple stroke of a pen is unforgivable.”

Below are tweets from some of those in the Canadian media industry who offered their opinions and reassurances: 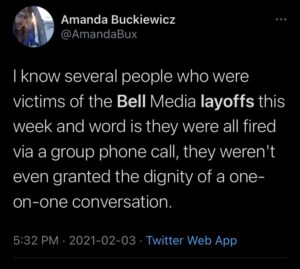 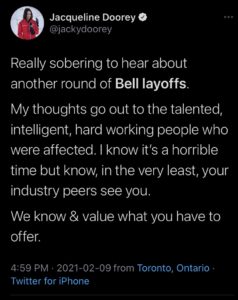 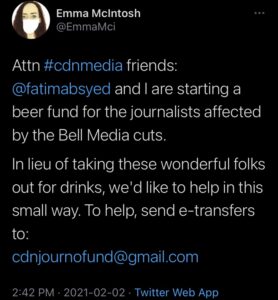 Those that were looking for a recourse, contacted lawyers to ensure the severance packages provided were fair especially during a global health crisis that impacts finding a new job.

While the world remains in an uncertain state, the layoffs are definite. The news of the layoffs is particularly interesting given its timing. It’s come just after the conclusion of the highly praised mental health awareness campaign, Bell Let’s Talk. For a company that loves to harp on about mental health, Bell continues to neglect and torment their workers behind closed doors. Almost as if it’s become vogue for companies to attach their names to trendy campaigns as long as it helps their bottom line. It’s unclear if more jobs in media will be axed.