What drives your decision of selling this place?

Are you worried about your financial stability after leaving?

Are you excited to be with your kids again?

Why you do what you do?

When you work very hard throughout your life and suddenly the thing you have worked for is coming to an end. That is the saddest thing in the world. But he saw it coming although he "can't". Giorgio Taverniti is the owner of Frank's Pizza House. He is serving and contributing to pizza industries for the past twenty-seven years with his mom.

Giorgio is suffering from Glaucoma. Glaucoma is a rare disease, in which one has optic nerve damage and loose partial eye site initially. He has it since he was nineteen years old. He said, from the last two-three years he is losing more site than usual. His doctor says he is becoming completely blind in upcoming years. He is planning to sell his pizza shop because of this reason. But he said, "I still hope no one buys this store so that I don't have to leave making pizzas."

Giorgio is a family man. He started his journey with his mom and running the store under her supervision. Unfortunately, they lost her couple of years ago. He said he is very happy and satisfied with the time he had with his mom. She was very helpful and generous with people and he envies her.  He is running the store with the help of his father and wife. His wife is a lawyer and aspiring to be a judge someday. They have six kids together. Giorgio said, "He will be very happy to be back with his children" After selling the place he just wants to spend time with his family for a year.

Giorgio said one thing he learned from his mother is to read people and help them. Frank's Pizza House sells pizza slices from zero to three dollars. "When someone is coming and ask for a slice, I can see in their eye when the count for three dollars. I read people, I can tell if they have a bad day. For most of the homeless people, we give free pizza slices." says Giorgio. "People ask why do you do what you do! I said because it is the right thing to do. Why would someone need a reason to do something right." 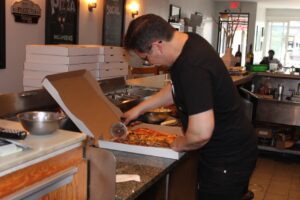 Giorgio has contributed to the pizza industry not only by making pizzas. He has been a judge for many pizza competitions happening in Toronto. Giorgio used to teach a subject called pizza 101 in George Brwon college. His pizza store has won many awards and titles throughout these years. Recently, they won Best old school Pizzerias in Toronto by TRNTO.com in September 2019.

One could hope to have something going on forever. But as someone says "All Good Things Come To An End." We don't know until when we will able to enjoy his tasteful pizza!

How a customer reacts about Giorgio!