Ninety minutes before this year’s NHL trade deadline, Kyle Dubas made a deal with David Poile and the Nashville Predators. The trade was Alex Biega going from the Leafs to the Predators in exchange for everyone’s favourite, future considerations.

Before you click away, April 1st isn’t until Friday, so no, I am not joking. There is more to this article than just Biega for future considerations, though. This deal could be the Maple Leafs giving Biega a better opportunity to play in the NHL. In Toronto, Biega was probably ninth or tenth on the organizational depth chart on the blue line. This trade also frees up a contract slot for the Leafs to sign NCAA or European free agents. The team has already signed Nick Abruzzese to an entry-level contract and will probably look into doing the same with Matthew Knies whenever his season concludes. Puck Pedia currently has the Leafs at 50/50 professional contracts, but Cap Friendly has them at 47/50. The discrepancy is likely from Puck Pedia including William Villeneuve, Braeden Kressler, and Ty Voit all have ELCs, but are exempt from the 50 contract limit.

Usually, the details from trades that include future considerations never come to light. But I think we can speculate on what the return for Biega might be. Enter Philippe Myers.

A loan is not the same as a trade. Myers is still the property of the Nashville Predators and can be recalled at any time. But after only playing 27 games, being placed on waivers, clearing and then being loaned to the Marlies, things have taken a turn for Myers. In loaning him to the Marlies, where they can’t control his ice time or anything really, it’s fair to say the Predators don’t seem very invested in his development. But for the Maple Leafs, why not get a look at a 25-year-old, right-handed defenseman who is 6ft 5 and over 200 pounds. Myers is only a year or two removed from good seasons playing in Philidelphia’s top four.

Now, Myers is under contract for next season which carries a cap hit of 2.55M. The big kicker is that Myers’ salary shoots up to 3.8M next year. Good thing there’s an interesting wrinkle that we have yet to iron out here. Because of Myers’ age and the contract structure, the Predators would receive a cap credit of $616,666 in 2022/2023 for buying out his contract. The savings in actual dollars would also be quite significant. I am assuming here, but it’s not a reach to say the Predators buy him out this summer, which would make him a free agent.

So, maybe the future considerations for the Biega trade are just a closer look at Myers before he is bought out and becomes a free agent this summer. If that’s the case, let’s take a deeper look at Myers and his last few seasons.

In 2019/2020, Myers spent the majority of his season playing in a top-four role next to Travis Sanheim and Shayne Gostisbehere. Two defensemen who are known for their puck-moving and offensive ability.

Overall, it was a very strong season for Myers.

What happened in 2021 then? Well, the Flyers finished second last in goals against for the 2021 season. Last offseason was an interesting one for the Flyers. If we’re looking at their defensive stats from last year, it would seem that the Flyers’ goaltending curse has rubbed off on Carter Hart. Hart had a .877 save percentage in 27 games last year. Brian Elliott didn’t fare any better posting a .889 save percentage in 30 games.

In 2021, Myers saw an increase in his minutes at both 5V5 and on the penalty kill. The overall numbers weren’t as good as the season before. 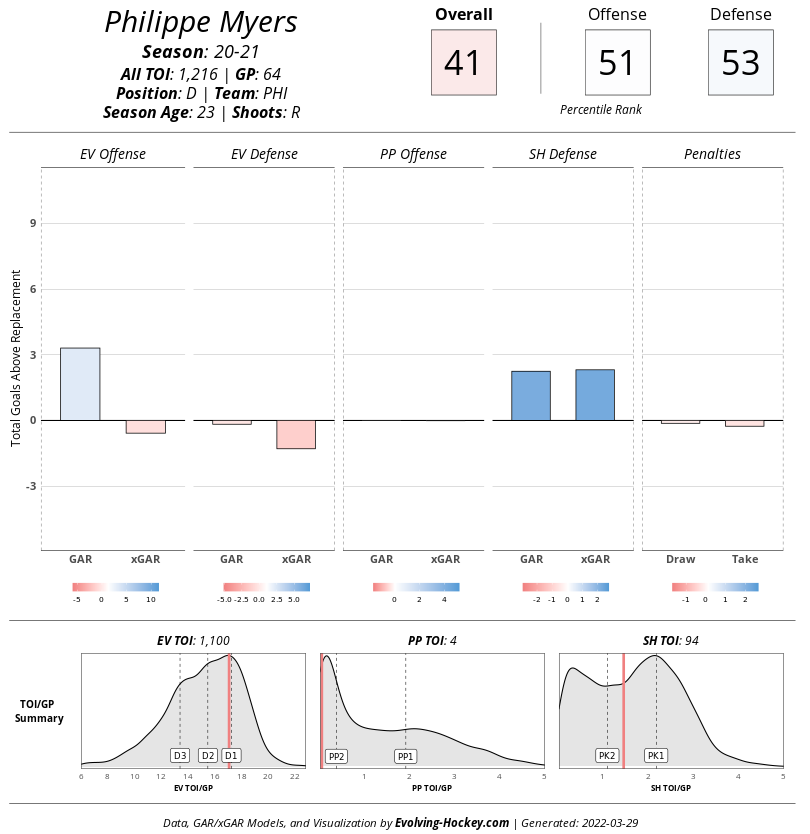 But a big part of his increased minutes came from his coach Alain Vigneault trusting him to play more against the other team’s best players. His results against elite competition were much improved from the season before playing a similar role against the NHL East division, which featured PIT, WSH, BOS, NYI, NYR, NJ, and BUF.

The Micro stats for Myers last season are encouraging as he profiles as a defenseman that does a decent job driving play, defending his blue line, and killing penalties. Once again, Myers played the majority of minutes next to Sanheim. 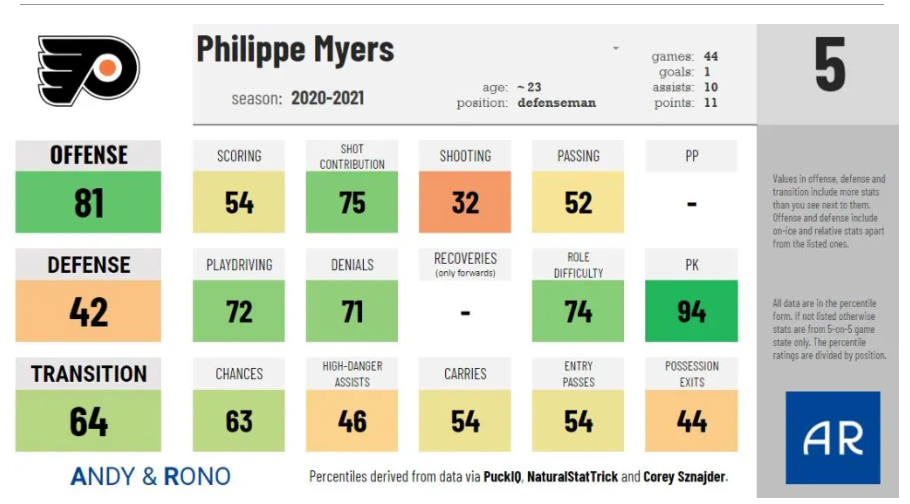 What Happened in Nashville?

What happened in Nashville that caused this player to clear through waivers and be loaned to a different organization’s AHL team? Well, let’s take a look at who he’s been playing with this season with the Predators.

Myers’ numbers away from Mattias Ekholm and Roman Josi are awful this year. But if we’re looking at the type of defensemen he’s had success with, are we surprised? Ekholm, Josi, Sanheim, and Gostibehere are all defensemen who are capable puck carriers and good skaters. That’s not necessarily Myers’ game. If he’s able to be a good player away from the puck and a complimentary piece to those type of defensemen, that’s fine. I am not shocked that he didn’t play well next to Mark Borowiecki, Harpur and Alex Carrier. But for some perspective, here are Josi and Ekholm’s numbers away from Myers this season.

Here is what Samuel Tirpak, a scout for Dobber Prospects and SVK web Oh my Hockey had to say about Myers’ game.

“Myers is a weirdly amazing skater. Not really spectacular in general, but his mobility for his size and his usage of it to close gaps and figure out entry defense is amazing. He has the toolset to be productive offensively along with being the  physical who takes away time and space defensively that he already is.”

It’s a small sample, but why they’d stop playing Myers with either Josi or Ekholm? Josi is having a fantastic season and putting up great numbers playing next to Dante Fabbro. But I don’t see a combination with Ekholm this season producing better actual and expected results than when he was with Myers. The duo wasn’t on the ice for a goal against in over 50 minutes of play at 5V5 together, why split them up? Why place Myers on waivers? Why loan him to another team’s AHL affiliate?

If the Nashville Predators want to buy out Myers for a cap credit or trade him away, go ahead. The Maple Leafs have two offensively-minded defensemen who can move the puck and skate well (Rasmus Sandin and Morgan Rielly) that he can play with. Maybe he’s worth placing a bet on at 2.55M and acquiring via trade in the offseason. But Nashville probably values the cap credit they would get from buying him out. Also, free is always better than not free. Who knows, maybe they recall him at some point between now and the end of the season and his standing in the organization changes. But If this Maple Leafs’ way of trying to get a better look at Myers, then it could be a great buy-low opportunity. Here is what Nick Barden, a reporter for the Toronto Marlies with The Leafs Nation has to say about Myers’ time with the Marlies so far.

“The Marlies have used Myers in two situations since he’s come over from Nashville. He’s played with Teemu Kivihalme up against the other team’s best players and been effective. But he’s also played with Carl Dahlstrom as the Marlies are trying to figure out the best lineup they can ice before the Calder Cup playoffs.”