Arnold Boros has always had a passion for soccer. Having had try-outs for professional clubs in England like Charlton United, he realized that the pay for play system in North America hindered the growth of players whose parents did not have the financial resources. Given his stature in the local soccer community in Mississauga, he decided to leverage that reputation into a positive change. He began running an after-school soccer program for underprivileged youth.

Leverage that Reputation into a Positive Change

“The program started as a way to keep kids active and away from dangerous activities. When I was young, there were many kids who were more talented than me, but they got involved in things that they probably shouldn’t have. This program ensures that that does not happen again.”

It has been three years since the inception of the program. At first it was very small in size with less than 10 kids, it has grown considerably in the past two years.

“We started off really small, but I guess people liked what we were doing, and now we have well over 50 kids that come consistently to our program. It is largely due to the power of word of mouth.” Boros tries to maintain a balance of competitive fire and instilling qualities that go beyond soccer. 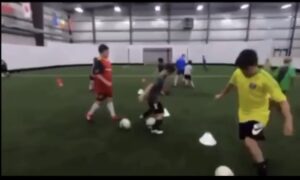 “We do like to let the competitive juices flow but not at the expense of other skills. First and foremost I want all kids to develop skills that will help them in the real world. Team sports foster skills like teamwork, leadership, communication and even social skills”.

Develop skills that will help them in the real world

When the pandemic hit, Boros had to alter his program in a manner that would be safe yet functional. He designated all the kids 6ft apart if  they were not in the same household. Boros also said he tried to incorporate as much engagement as possible. The kids were instructed to imitate each others moves with the ball and pass the ball to each other in creative ways while maintaining distance from each other. It was a tremendous success among the kids and soon they would exclusively ask for the imitation drill. Boros mentioned his relief when the kids adopted the new drills.

“For some of the kids it was the only time they would leave their home and interact with other kids face-to-face” Arnold said solemnly. “It was like a weight lifted off my shoulders, when the kids took to the drills like they did. “Michael who is a 10 year old once told me that it was the best part of his day, and that’s when it really hit me that we must be doing something right” he said cheerfully. It wasn’t just the kids who thought that Arnold was doing something right, the parents echoed a similar sentiment.

Angela Skinner, a mother of two showered praises for Arnold. Her sons Theo and Luke who are 10 and 7 respectively are big fans of the program.

“Theo and Luke are both very energetic, so the program helps both of them channel their energy in a healthy way. Plus they both are at an age where socialization is crucial and the program ensures that” she said gleefully, as two kids were heard in the background in what I could only surmise as incoherent jabs directed at one another. 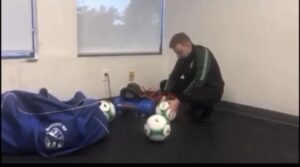 Boros, who works at Erin Mills Soccer Club credited them for being so accommodating and supportive. “The clubhouse lets me borrow their equipment free of cost and has been a major reason for the success of the soccer program. My experience at Erin Mills helped me create such an open and positive atmosphere” he shared.

I had a chat with Boros, where he speaks at length about spearheading the after-school soccer program. The link is below.

With the third wave of COVID-19 officially here, Boros has had to suspend his program indefinitely. He continues to adapt though. He creates a disappearing interactive vlog once a week which gives a physical and social challenge to kids. The challenges vary between running around the block 3 times a week or other challenges like saying thank you and please 5 times a day. The parents notify him if the kids actually fulfill the challengers. While the program remains in limbo due to the lockdown, Arnold proclaimed that a “mentor doesn’t just leave when it gets tough.”