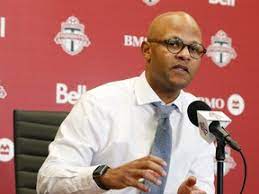 The Toronto Football Club is now looking for a new General Manager after one of the worst seasons in franchise history. The general manager and senior vice-president of soccer operations Ali Curtis were dismissed on Monday after a 1-0 loss in the Canadian Championship against CF Montreal. A score that did not match the team’s poor effort in Curtis’ final match. The club announced that it was a mutual parting of ways. Curtis says he is looking forward to reuniting with family back in the United States. Curtis joined the team in January of 2019 was seen as a fixture for the franchise for years to come. Curtis was even given a multi-year extension in March and team president Bill Manning described Curtis as “a talented executive and tireless worker.” With this praise, there were many questions remaining for him and the team after the November 7th finale of their season. Curtis arrived at the club with great expectations after former general manager Tim Bezbatchenko built the team into a champion before leaving to become the president of the Columbus Crew. In the first month of Curtis’ regime, the club lost star striker Sebastian Giovinco and playmaker Victor Vazquez who moved on to opportunities with Saudi Arabia’s Al-Hilal FC and Qatar’s Al-Arabi SC respectively. Curtis did manage to snag another playmaker in Alejandro Pozuelo from the Belgian club KRC Genk. Along with head coach Greg Vanney, TFC made the MLS Cup Final in 2019 marking their third appearance in four years.  This year was met with two different head coaches that were fired and not renewed after the season finished. There were discussions with Curtis and the club about his future that began in September. https://www.torontofc.ca/news/toronto-fc-general-manager-and-svp-of-soccer-operations-ali-curtis-departs-club-

Curtis is ready to move on and reunite with his family back in the U.S and praised the city, club, and owner of Maple Leaf Sports and Entertainment. He is ready for a new professional challenge and leaves with no hard feelings for the organization “Next year, there is a lot to be excited about with TFC. It has exceptional people, and it is moving in an exciting direction. I wish the team, the staff, MLSE and TFC fans the very best.”