The shopping mall – does it still have a place in this world of online commerce and instant convenience? I ask myself the same question when I browse Youtube, typing in “dead mall walkthrough” in the search bar. When we look to the past, we see depictions of these sprawling and active labyrinths as monuments to an era of consumerism and upward mobility, and yet they have a certain appeal.

The mall, while ostensibly operating as an outlet for numerous retailers, embodies more than simple commerce. Over time, they can become a hub to nearby for nearby communities to gather, see familiar people, spend time with friends, and keep in the now. It was this ideal – to serve a purpose like community centres – that was originally envisioned by the grandfather of shopping malls himself, Victor Gruen.

That’s why I find it so tragic to see a mall past its prime and deteriorate into irrelevance. When I watch those videos on Youtube, I get hit with an unshakable sense of gloom and dread. For lease posters, dingy lighting, vacant corridors – not a place anyone would think of when they think “fun!”, “social!”, or “trendy!”. It’s the same feeling you get when you walk through a bad neighbourhood – “was it always like this? What changed?” 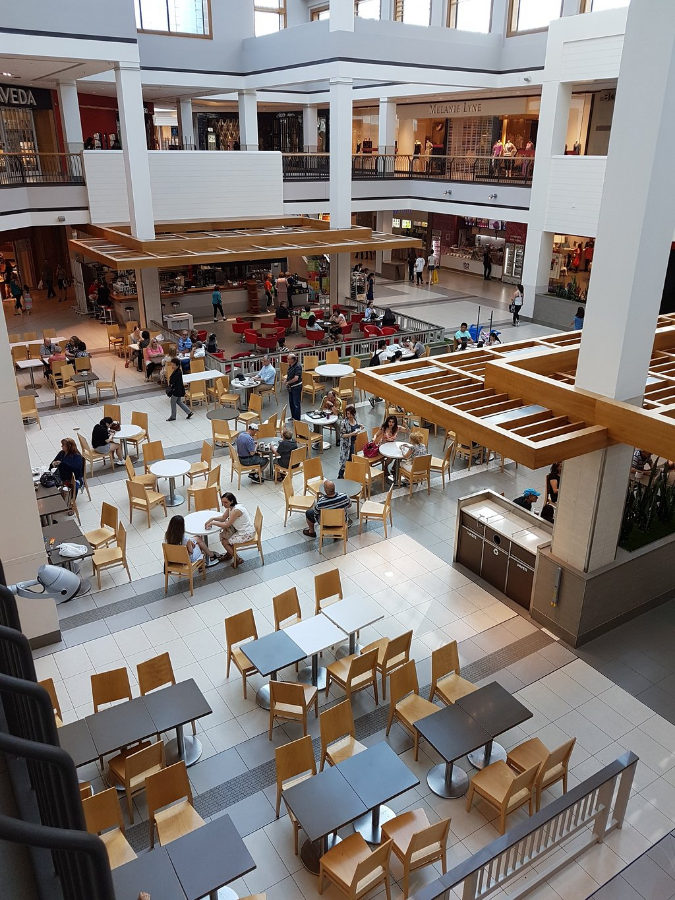 The Promenade Shopping Centre almost fell into that category. As a Thornhill native, I can recall the memories spent under its glass canopy trying on suits, watching movies at the cinema, and begging for the newest video game. Whether it was perusing novelties at the It Store (the 90s precursor to Spencer’s Gifts), contemplating a new furry friend at PJ’s Pets, or wasting quarter after quarter in the Cineplex arcade, there was always a little something for everyone at the Promenade.

Then, the big-name stores departed one by one, leading away customers like the Pied Piper of Vaughan Mills. With the fall of Sears in 2018, their anchor store which opened with the mall back on August 8th, 1986, the state of the current retail landscape was made clear; the Promenade was falling out of favor with the modern shopper. Cadillac Fairview had already sold the mall in 2017 to Liberty Developments, a private investment group headed by Michael and Aaron Serruya, who founded the Yogen Fruz frozen yogurt chain together and, coincidentally, opened their first location at the Promenade.

Toronto and the Greater Toronto Area have witnessed a captivating amount of redevelopment and gentrification in the past few decades. After everything I’ve said, it sounds like the Promenade’s story will end the same way any old property that lands in the crosshairs of urban renewal will end: a date with a wrecking ball and a flurry of signage advertising new condominiums, the building paved over and rendered all but a memory. Well, you’d be half right.

Patrons of the Promenade may have recently noticed the signs advertising the Promenade’s next “life stage”: the Promenade Park Towers. Early renders on the project’s website show many changes on the way for the mall, and with a focus on walkability and greenspace, it bears a strong resemblance to Victor Gruen’s intentions. Gruen revolutionized cities as an urban renewal expert and architect, designing the first open-air shopping mall in the United States, the Kalamazoo Mall in Michigan. While renowned for his long career in transforming downtowns across the globe into successful shopping districts, he later grew to dislike how future developments “bastardized” the idea of the shopping mall by prioritizing vehicular traffic over pedestrian traffic.

Indeed, when we think of a typical mall, we envision what is essentially a citadel surrounded by a black sea of asphalt (more commonly known as a parking lot). With a modern understanding of environmental health, it’s obvious how the over reliance on cars and subsequent impact on urban planning has had negative repercussions on our well-being. Nothing really feels accessible in the suburbs. We tend to drive where we could walk because the overabundance of streets, sidewalks and parking lots creates artificially inflated feelings of distance. They sometimes call cities “concrete jungles”. They need to start calling suburbs “asphalt deserts” – the lack of shade is very discouraging.

The Promenade’s redevelopment addresses these issues by also addressing the fact that the mall’s design has dated when compared to its upgraded contemporaries in Hillcrest Mall, CF Markville, and Vaughan Mills. There are vital factors which determine the obsolescence of a property. Just as with arenas and stadiums, location, size, and amenities must all be considered. A mall too far away to commute discourages return shoppers if they aren’t impressed with what they find. A mall that’s too big for its own good will be difficult to navigate, a financial nightmare in upkeep and maintenance, and struggle to maintain a favorable occupancy rate. Likewise, a mall that isn’t big enough will appear insignificant (if it’s quiet) or overcrowded (if it’s busy) or fail to turn a profit through the lack of rental spaces. Lastly, a mall that doesn’t have stores which appeal to the clientele, or lacks modern conveniences like free wi-fi, is just as likely to fail as the others.

The Promenade didn’t become an outright dead mall for the fact that it still provides a service to the nearby communities as a source of employment, appeals to local clientele with specialty stores (jewish and pan-asian markets), and predates much of the surrounding suburban development and as such became a focal point of the community. That being said, with mega malls like Yorkdale within driving distance, it was evident that maintaining the course was not an option.

For an outside opinion on the direction the Promenade was going, I spoke with Craig Patterson, founder and editor-in-chief of Retail Insider, an online magazine covering new developments in the retail industry. Craig has quite the resume. In addition to his 25 years of experience in analyzing the Canadian retail landscape, he is also President & CEO of Vancouver-based Retail Insider Media Ltd, and Director at the University of Alberta School of Retailing in Edmonton.

I referred to the economic impact made by the COVID-19 pandemic on shopping malls like the Promenade, and Craig’s response elaborated on the necessity of failure and renewal in the industry. For landlords, here is an opportunity to maximize profits through redevelopment, as the current social realities have minimized the profitability of existing tenants. By integrating residential units into a commercial facility, the Promenade could turn a new leaf financially, as many Promenade’s occupants are apart of an industry which has hit a rough patch.

When bringing up the phenomenon known as the “retail apocalypse”, Craig explained to me that the COVID-19 pandemic had accelerated what experts had already seen as an inevitability. The oversaturation of certain categories of retail, namely fashion, has led to the bottom falling out of many businesses which were financially struggling, such as Aldo and Le Chateau. Out of the Promenade’s 133 available shops, eateries, and offices, 42 of those are dedicated to shoes and apparel (everyday, formal, and sportswear). Thus, a sizable amount of real estate is at jeopardy if the parent company of a retail outlet suffers a decline in business. 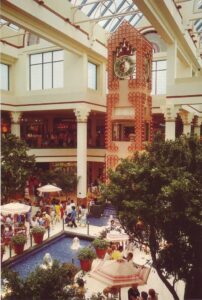 Department stores are also at a disadvantage in today’s retail climate, as evidenced by the demise of Sears Canada and the slow erosion of The Bay. The Promenade had already seen two former department stores capitulate in the mid to late 90s (Bretton’s in 1996 and Eatons three years later) but rebounded by finding new tenants to fill the vacancies shortly after. Mismanagement and slow adoption to online retail are the usual culprits for failed businesses, but as Craig said prior, it is another case of market redundancy – stores with nothing new or different to offer becoming superseded by a retailer with a hot commodity or better business operations.

The effects of the Pandemic on shopping habits have also emphasized the importance of e-commerce, as social distancing and quarantine regulations shut down several malls and plazas across the country. Craig expects future shopping experiences to be a hybrid of online and physical exchanges. Despite the shift to digital sales, there is still a desire for people to shop in person. He emphasized the need for stores to provide a better showroom experience and have higher standards for customer service if they want to compete with internet shopping.

Promenade’s redevelopment aligns with the future of the shopping mall as a whole: effectively becoming both a community node and a miniature city. The Promenade takes up a sizeable footprint in terms of land, and land value is always on the minds of development firms. The scarcity of land drives up the value, and the use of existing land is measured in terms of cost-effectiveness. With the demand for housing in the city on a constant rise, the Promenade’s evolution towards a mixed-use facility and integrated residential/commercial complex seems like an eventuality for both existing shopping centres as well as future developments.