COVID-19 has changed the lives of everyone on this planet and added more stress and anxiety, causing alarming levels of despair, suicidal thoughts and hopelessness in the Canadian population. People are struggling with fear and uncertainty about their own health and their loved ones’ health, concerns about employment and finances, and the social isolation that comes from public health measures such as quarantining and physical distancing. Canada’s unemployment rate sat at 8.6 per cent as of December 2020, down from a record high in May 2020 when it leapt to 13.7 per cent as the economy ground to a halt. In February 2020, the month before the pandemic hit, Canada’s unemployment rate was 5.6 per cent. 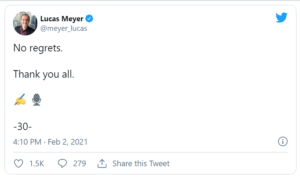 Everything considered, 2020 wasn’t as bad as economists first feared, according to Moshe Lander, an economics professor at Concordia University.

“If you told me back in March 2020 that we’d end the year still under lockdown, still under stay-at-home orders, yet we would have unemployment rates below 10 per cent, I’d high five you — or, I guess, elbow bump you,” Said Lander.

More than 5.5 million Canadians felt the impact of the economic shutdown last spring, including 3 million who lost their jobs and another 2.5 million who remained employed but experienced absences related to the pandemic. Since then, Canada experienced a steady streak of job gains from May to December as lockdown restrictions were eased, but that streak ended in December when 63,000 jobs were lost.

Bell Media has terminated over 200 staff at radio and television stations across Canada, impacting many programming, newsroom, on-air and sales positions. Media reports suggest that the layoffs impacted unionized and non-unionized employees alike.

A spokesperson for Bell explained that the positions were eliminated in order to streamline the operating structure at Bell Media.

“As the media industry evolves, we’re focused on investment in new content and technology opportunities while also ensuring our company is as agile, efficient and easy to work with as possible,” said the Bell spokesperson.

“As a result of their termination without cause in this round of layoffs, non-unionized Bell Media workers are owed full severance pay. Age, length of time with an organization, job, compensation, and benefits are all variables that go into calculating severance pay. It is always much more than one or two weeks’ pay per year employed, and can amount to as much as 24 months’ pay in total. When an employee is fired without receiving the proper amount of severance pay, they have been wrongfully terminated.”

The economy lost nearly 213,000 jobs in January, erasing months of gains and marking the worst monthly employment losses since April.

The reopening in February reversed the trend, with gains mostly in Ontario and Quebec, as well as in industries heavily impacted by tightened public health restrictions. The national unemployment rate dropped to 8.2%, the lowest level since March 2020, when the COVID-19 pandemic first broke out, and down from 9.4% in February.

According to Statistics Canada, the unemployment rate in February would have been 10.7% if it had considered Canadians who wished to work but didn’t look for work. According to financial data company Refinitiv, the figures blew past forecasts of a 75,000 increase and a 9.2% unemployment rate. 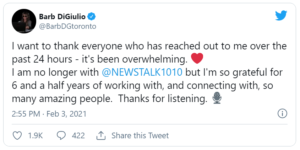 The Canadian economy added jobs for the third month in a row, recouping more than half of the losses from COVID-19. In July, employment increased by 418,500, taking the total number of workers reclaimed in the last three months to 1.7 million. During the peak of the pandemic in March and April, Canada lost 3 million jobs. The employment rebound in Canada has outpaced the U.S., which has recovered 42 per cent of its payroll losses.

The federal government is keeping a close eye on the labor market and are working on the re-opening of the economy with more jobs   It is time for governments and decision-makers to continue to step up and make the healing of the economy a priority by investing in a long-term, system wide response..