Whether you like Star wars or not, it is undeniable that this is the greatest franchise that has ever existed. Its merchandise and brands can be seen in all the industry and its fan base expands all over the world. It is without a doubt the supreme title holder in the hall of fames.

EVEN NOW decades after,

People still talk about the ‘Millennium Falcon‘ and the iconic ‘Darth Vader‘ like it was only just yesterday that they saw the first movie, its for a fact that the Star war universe continues to fascinate each generation with their series and will continue to do so.  But in the years that have come and gone many Star war fans are left debating; which star war movie is the best one?  Out of all the movies that have been released which one takes the throne for the best star war movie, a debate that might never end.

If you search on the internet, ‘Which Star Wars movie is the best?‘ You will see thousands and thousands of results and reviews made by fans from all over the world, ranking the series and determining the movie which they think is the best. The most popular and agreed upon is that,

‘Episode V: Empire strikes back is the best one but that is mostly done based on votes and poll results.

But success depends not on how many fans love a particular movie but how much that movie has made in the box office; that is in dollars.

MOST VIWED AND MONEY GROSSED IN THE BOX OFFICE 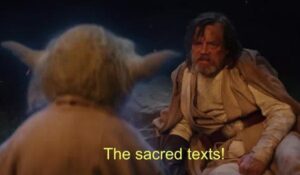 According to Google trend, the most viewed movie is Episode IV: A New Hope followed by Phantom Menace. The view count was especially high during May and December ; now some might say that since it was released in the year 1977, many people must have watched it more as the years went by but that could not be any more true than saying a STORM-TROOPER has great shooting aim. 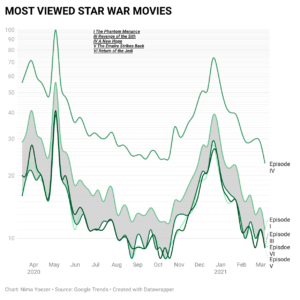 The Google trend was used to search up the most viewed in the last year. Again, the view count was especially high during May and December; this could be due to the new Star war movie being released or the force bringing in new fans to watch the star war saga

because the pandemic ignited the inner Jedi in the fans; encouraging them to re-watch the whole series again. 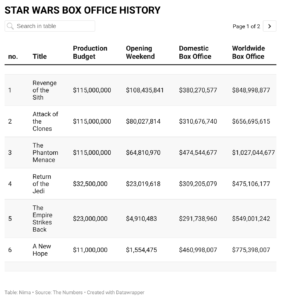 NOW, This might come as a shock but the movie that has generated the most is,

YES! with the presence of Obi-wan and Anakin Skywalker, it grossed the most money.

On a budget of only

the movie produced around

While ‘New Hope” grossed the third-highest box money for the franchise.

The second being ‘Revenge of the Sith’. 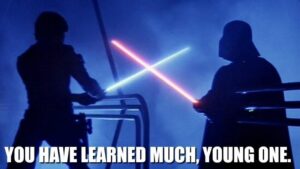 So, financially Episode I was the most successful out of all the franchises while Episode IV  is the most viewed. Thus, making the Phantom Menace; the best star war movie in the Saga. For those potential star war fans who have a lot to watch,  START by watching the first movie that was released.

You could watch Episode-vise but then it kills the fun, 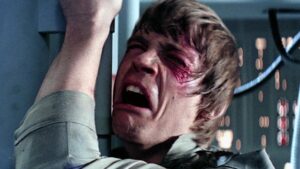