Both the men’s and women’s volleyball teams won their first-round matches in the OCAA playoff tournament. The evening started with the women’s team taking on the George Brown Huskies. The Huskies put up a fight after a blowout first set, with the Sting taking it 25-11. But it was, ultimately, not enough, with the Sting taking the second and third sets 25-16 and 25-20 on the way to victory.

Ngameni Davina led the way with an impressive 16 kills while also showing how it’s done defensively with a team-leading ten digs. Alba Martinez, Bibi Kamila, and Stella Dada were defensive stars with nine digs each. It was a dominant performance overall, with the Sting beating the Huskies in most aspects of the game. They enjoyed a 39 to 21 advantage on kills and 11 to 5 on service aces, with Drew Davis leading the charge with five aces.

The first round has gone well, but the women’s volleyball team has a challenge on their hands with Humber College (8-1 regular season) up next in the quarter-finals. Davis remains optimistic about their chances, saying in a post-match interview with sideline reporter Ande Fraske-Bornyk:

“(We have to) just stay in it, play our game, that’s the way we win. Play the way the Sting play. Can’t let them get in our heads. We just have to just stay on top of our own stuff.”

The Seneca Sting women’s volleyball team plays away at Humber College on March 12. 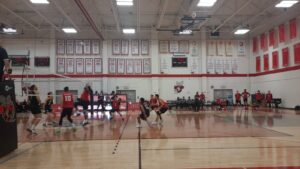 The Seneca Sting men’s volleyball team took to the court after the women’s game for their first-round playoff against the Durham Lords. After a relatively easy first-set win, with the Sting taking it 25-15, the Lords found the right gear and put up an impressive fight, winning the third set 25-23, before eventually succumbing to the Sting. The final scoreline of 25-15, 25-23, 23-25, 25-21 isn’t indicative of how close and tense the game was, with every point hotly contested.

Peter Ostranski-Ayles and Daniel Kwang had impressive nights on both offence and defence. Kwang contributed to the winning effort with eight kills and ten digs, while Ostranski-Ayles managed ten kills and eight digs. However, the star of the game was Nathaniel Ling, with a show-stopping 19 kills, nine digs, and two service aces along the way to victory.

Like the women’s team, the Sting men’s volleyball team has a difficult road ahead, meeting the undefeated Humber College in the quarter-finals on Saturday. In a post-match interview, Coach Brian Singh said that this win was the kind of momentum boost the team needed before going into a game against the number one college volleyball team in Ontario.

You can catch both games live and on-demand on Saturday at senecasting.ca/watch.