Over the past 100 years, numerous incidents have been associated with explosive ammonium nitrate. On August 4, 2020,  approximately 300 people died and 6,500 injuries. the explosion led to the displacement of about 300,000 people.  the port explosion was one of the most powerful non-nuclear explosions in history at around one-tenth the strength of the atomic bomb dropped on the Japanese city of Hiroshima. It is far more powerful than any conventional military weapon.

In the following map, we will show you where the port is located and which part of the city was damaged:

About a week after this disaster, the Lebanese community immediately moved to help their Lebanese sisters and brothers — establishing a charitable association in the name of “Lebanon Strong” that sends Containers filled with firefighters’ jackets, helmets, hoses, and supplies for children, including milk, medicine and food.

Amid the confusion, fear and concern sprang to action. With 25 years of experience in the shipping world in Canada, Dina Bakhit knew what she want to do to start helping the people of Beirut by reaching out to Hamsa Diab one of the Lebanese businesswomen on social media.

Hamsa Diab was at a candlelight vigil paying tribute to the victims when she got the call to help launch Lebanon Strong. The founder and festival director of Taste of the Middle East and Blog Middle East TO said yes without hesitation. 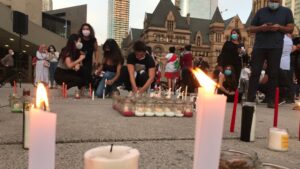 Hamsa says: “We put a team together, we just announced on Facebook, a lot of people wanted to help a lot of people. And that container was filled up and like in a week because of the donations of Arabs, non-Arabs, Lebanese Palestinians, Iraqis, everybody was dropping off donations at the ad Dina’s warehouse in Mississauga.”

The explosion of August 4 touched the life of every person who lives in the confines of the city, as well as the life of everyone who lives abroad, far from their homeland and those they love, especially the children. While some of them lost family members, those moments had immediate physical and psychological setbacks, to relieve them in just 11 weeks after the explosion, Lebanon Strong had already shipped 11 containers to the country. 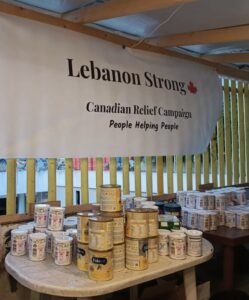 The explosion sparked the economic and political crises that Lebanon is facing today,  after a year and a half of human catastrophe. to this day, the Lebanese State is completely unable to help its citizens because of politics.

Meanwhile, the Lebanon Strong team is pushing ahead with its efforts to assist countries throughout the Middle East.

You can reach out to them for donating and volunteering by their website: https://www.lebanonstrong.ca/