“It was very fast, and it was like wow, I can’t believe it is happening”, Taylor Gignac.

Taylor Gignac always enjoyed the TV game show, Family Feud,  but never thought that he and his family could actually make it to the show. One day while browsing the internet, Taylor saw a post on Family Feud Canada’s Instagram page inviting families to apply.

Appropriately it was Father’s Day.  Gignac decided to apply.  He made a video and sent it in.

“Who cares what happens? Either we move forward or not, but at least we try”.

The video shows the Gignacs jumping into the pool, playing fun games with a little blurb about who they are. This is how the five of them introduced themselves:
Mother of three, Judy Gignac is “The Brains,” and father Jamie Gignac is “The backbone” of the family. The brothers are like the three musketeers, Jonathan is “The bronze”, Blair is the “The Rock,” and Taylor is “The drama queen.”

“I was like, this should be good enough, if they don’t like us, at least we tried.”  said Gignac.

Family Feud is a top-rated game show where two families compete against each other to try to guess answers to survey questions.  Whichever family scores 300 points or more moves forward to the fast money round with 10,000 dollars on the line.

The Gignacs got an email telling them to expect a response within 2-3 weeks. But it was only 43 hours later, the show replied to them to continue with the audition process.

The first audition was via Zoom call, and in less than 24 hours, the family was doing the second audition.

Finally three months later,  the Gignacs received a call from one of the show producers. They were braced for bad news.

“And she goes; we can’t wait to see you guys on the stage, and I remember we were all just freaking out.” 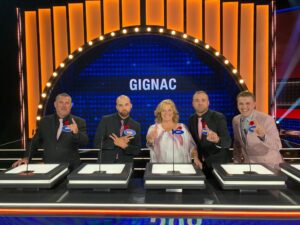 In late September, the family filmed for seven and a half hours.

“Walking up to the stage, I remember my family going; can we back out now?”

They made a pact to enjoy themselves and stay united, “listen no matter what happens on that stage we are still a family, and we still love each other. So, let’s go and do our best. We came here for fun, and we are not losing anything here, so let’s go play as a family”.They say the experience was crazy.

Being on national television is very intimidating, and it’s typical of people to get nervous. The moment the family stepped onto the stage, they thought “it is actually happening”.  According to Taylor, one of the scariest things for them was that on T.V. no one ever realizes the studio crew is also there.

Gignac says the host, Gerry Dee, made it a fun and easy journey.

Dee, he said,  turns out to be the most humble and helpful person one could ever meet.

The Gignacs say they had the time of their lives. And like champs, the family won all three episodes.

The Gignacs made many fun memories while shooting and were all ready to see themselves on national television.

The episodes were going to air in November. The family wanted to have a bunch of people at their house to enjoy their amazing journey. Unfortunately, due to the lockdown in Ontario, they were only allowed to have ten people in total at home. They had three different close friends and family come up each day.
The family wanted a big blast on the episodes’ premieres, but having that intimate moment and watching something that changed their lives was definitely special.

Watching themselves on television was very exciting for Gignac’s as not many people get the opportunity to do so.

The middle brother, Blair Gignac says, “When we got to watch the show, it felt like Deja Vu. It was really cool to see what they actually put in the show. How you looked, how you sound, how they put everything together”.

However, Taylor wanted to see more memories of them on the show.
He says, “I wish they added more, when you film an episode; it is an hour and a half worth filming, but now they put it into 22 minutes; there were so many memories I remember having that didn’t make it on T.V.”

The episodes are also available online on CBC Gem; the family can always look back to the fun memories they made.