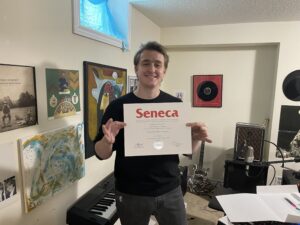 Seneca college is filled with proud graduates. In today’s segment of life after Seneca, we talk with a graduate of Seneca‘s independent music program Singer and songwriter Spencer Cropper.

Throughout Spencer‘s time at Seneca. He Learned very valuable skills that have helped him succeed as an independent recording artist.  Some of those skills include marketing, music theory, behind the scenes, and the technical side of music and performance, and so much more.

Spencer now after graduating in 2019 is releasing music on all streaming platforms. These platforms includes Spotify, Apple Music, and SoundCloud, and more

Spencer is mostly a pop artist who also travels with other bands, and can play a variety of different genres including heavy-metal and punk.

Spencer‘s biggest take away from The program. Is that pure talent does not mean anything  in the music industry? He says that to make a name for yourself it all comes with the hard work and marketing yourself, so you can be seen and heard, without a music label

He says that not only does Seneca‘s independent music program teach a lot about music itself, it taught him how to market himself to widen his listeners.

Currently Spencer is working on a project where he releases 14 different songs in 14 days. He is doing this mostly himself in his at home studio, however he does have some help from another producer.

Some of his Song titles include I want you all the time, I love you because you make me feel loved, and when I saw her last.

He also releases music videos, and live recordings of his music on his YouTube channel

Spencer is just one of many proud Seneca college graduates, and he hopes to continue to increase his audience.

You can check out all of Spencer‘s music in the links in the description below the article.