The Double Asteroid Redirection Test spacecraft is on its way to defend Earth from potential asteroids. NASA is about to get its answers to whether humanity can be saved with the help of this asteroid crasher. This is also a familiar science fiction plot from the movie Armageddon starring Bruce Willis, who declined an invite from the department’s administration, Bill Nelson.

If successful, DART would be the first spacecraft to ever alter the position of an asteroid. In September 2022, the spacecraft is set to crash into an asteroid to try to redirect the giant rocks’s orbit. It will test the theory that scientists can push away menacing space rocks on their way to a deadly rendezvous with Earth.The spacecraft lifted off  at the Space Force Base in California on Tuesday at local time (10:21pm). This refrigerator-sized, 1,200- pounds spacecraft will orbit around the sun to smash into Diphormos  at 15,000km/hr, an asteroid of 160 meters across. This investment of $330 million dollars is unusual for NASA as a civilian agency that focuses mostly on climate monitoring and signs of past life in the solar system but in 2005 the U.S Congress assigned NASA to protect the Earth from any hazardous objects that could possibly crosspaths with Earth. The goal of this experiment is to measure the effectiveness of the collision, even though Dimorphos is no danger to Earth.The collision will definitely not destroy Dimorphos but rather give it a little nudge, said Nancy Chabot of Johns Hopkins Applied Physics Laboratory who is managing the project. 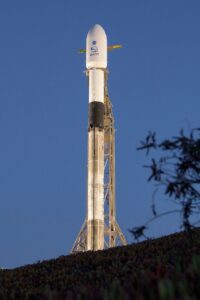 The asteroid orbits around a larger asteroid called Didymos. DART has to crash into Diphormos making it orbit closer to Didymos which will reduce the time it takes to complete one orbit from 11 hours and 55 min to 11 hours and 45min. Although, scientists are predicting this shortened orbit time, for the mission to be successful, they are simply looking for a 73 seconds change for now.  It will be a challenging mission. Brent Barbee, a member of the DART mission team and an aerospace engineer at NASA’s Goddard Space Flight Center said,“It’s kind of a big milestone for our species. Like, the dinosaurs didn’t have a DART mission.”

Approximately 6.8 millions miles away, DART will have to precisely hit the target which is a fairly small space rock. After the crash, using ground-based telescopes on Earth, scientists will be able to track Diphormos and how it orbits around Didymos change after DART impacted the space rock. If the mission is successful, this will give NASA the confirmation that DART can be used as a weapon as their planetary-defense arsenal.

DART will still have about 90% of its fuel once it reaches its target, Diphormos, and if it misses the asteroid, the spacecraft would still be able to aim for other asteroids. Ed Reynolds, the DART project manager at the Applied Physics Lab says, “Right now, we’re not keeping a list of backup dual asteroids to retarget against,” he said. “But the possibility is there.”