This new Tik Tok challenge is to simply record yourself kicking someone’s door.  This challenge started at college dorms but now this has reached to a whole new level and it’s not good.

Three kids went on a stroll over the weekend in Port Dover, Ontario and got caught on a security camera kicking on a resident door leaving those inside shaken. The incident happened early in the morning on Saturday. “They make because technically right now, if you start looking at this incident, not only are they trespassing at night which is a criminal offence, ” said Sgt. Ed Sandchuk, of West region OPP. Those kids could face trespassing charges and the Ontario police have made it clear that their kids need to be held to account for their actions. 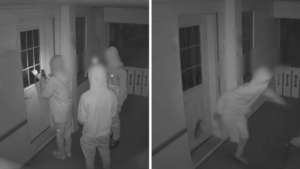 In a video released by the police, one of the teenagers can be heard saying “ You go” to the person closest to the door. “ No, you should go,” they replied. They continue to discuss who should go first until each of them takes turns kicking the door until the door swings open, the three teenagers are heard laughing as they run off.

Tik Tok released a research study last week asking a couple of teenagers what pushes them to take part in those challenges. To get comments, likes and views. But most importantly to impress others. 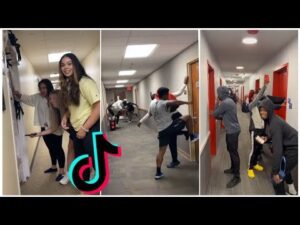 Most of the teenagers that take part in those pranks just want to attract the attention of others and in some ways that makes them feel like “the cool kid”. The cool factor is the peer evaluation and the digital platform that provides a fair amount of audience that can be huge. They use the song “Die Young” by Kesha as a backing track to the selfish stunts. The teenagers would kick the door in time to the lyrics as she sings “ I hear your heart beat to the beat of the drums” and they kick the door twice to make the banging noise.

This situation is not happening only in Ontario but in other countries as well, the U.S, and the United Kingdom. Residents are left with a broken door and their locks hanging out from the violent banging.