Sergeant Thomas Clark is a 13-year veteran of the Canadian Armed Forces. He spent a few years conducting in-flight safety on VIP mission flights with the Prime Minister, Governor-General, and the royal family. He described the experience as one that he’s thankful for, “That would take me all around the world. Experiencing new cultures, different countries, cities, and monuments is probably one of my highlights. Not too many people get that opportunity, so I thank the military for that.” 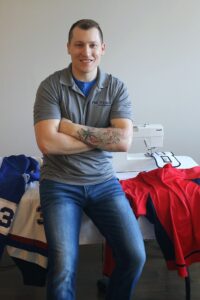 But this is a story about hockey jerseys. Or at least a story about how an armed forces member turned his passion for hockey and collecting jerseys into a thriving business called First Line Jerseys.

“I wouldn’t say I’ve done a full transition yet because I still have a full-time gig with the Canadian Armed Forces. I had a go-to customizer that I would send all my jerseys, but he decided to go in another direction… So I just kind of remember that we had this old sewing machine in the basement. It was my wife’s grandmother’s that she bought in 1952. It was covered in dust and in one of those built-in wooden tables. And I was like, let’s crack this thing open and see what it’s got.”

I first met Clark through a mutual friend. I have a hockey jersey collection of my own and was looking to have some rarer stuff from the 1990s customized with the names of my favourite players from that era. I was relatively new to the hobby and did not know a lot about the specifics. But that did not matter to Clark, who was more than happy to take the time to answer my questions. Our relationship and eventual friendship started with an exchange. I traded him a jersey that I was selling for some customization work.

The jersey on the left is a game-worn Doug Gilmour jersey from 1996. The jersey on the right is from my collection that Clark put together. Owning an actual game-worn Doug Gilmour jersey is a financial commitment not many are in a position to make. A recent auction for a game-worn Toronto Maple Leafs Wendel Clark jersey from the late 1980s ended for over $12,000 USD. For most collectors like myself, a retail authentic for a few hundred dollars will have to do. Being able to own one customized to nearly match the game-worn one makes it that more special. Clark explained how he sources his materials and era-correct number and letter fonts.

“I specialize in Maple Leafs jerseys because of one of my sources. They have a very extensive game-worn Maple Leafs jersey collection that they’ve used to build references… I also have contacts with the Leafs’ former team customizer and I can buy my kits directly from them. For other teams, I am not too restricted. I use customize sports, who are killing it with perforated and sublimated kits lately.” 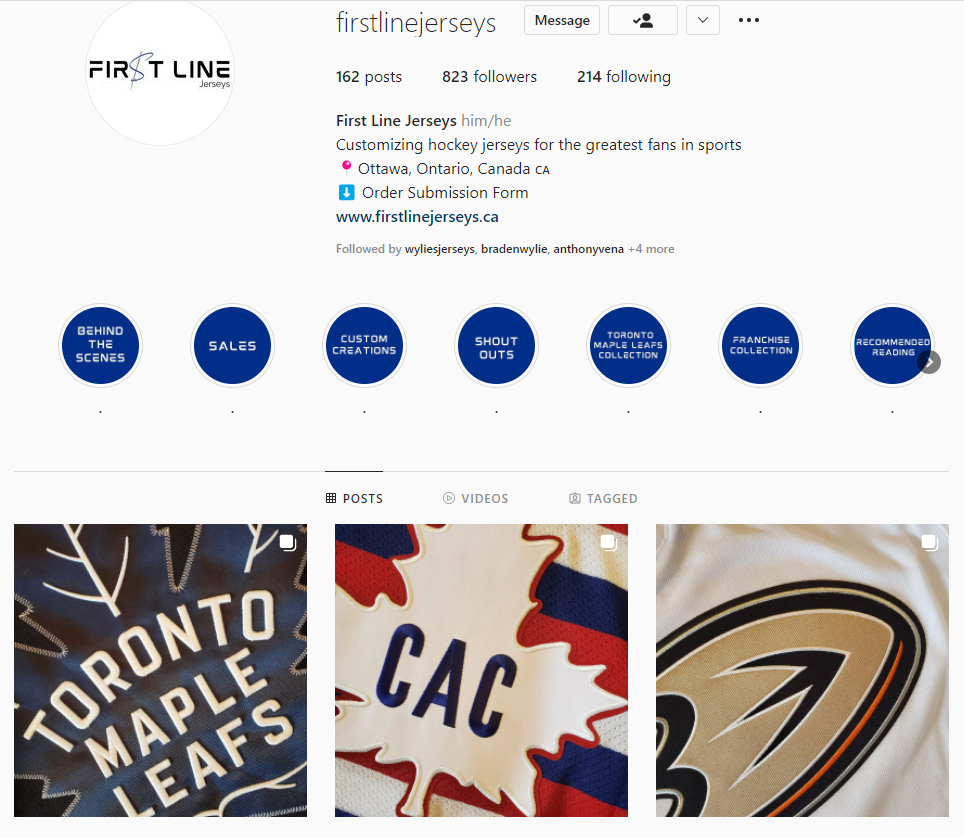 Most notably, he pointed out to me the work he did for a customer on the Maple Leafs’ new flip side alternate jersey.

Many customers that ordered the jersey from the NHL shop or even Real Sports, which is the official team store of the Leafs have been disappointed. A feature of the flip side jersey is that you can wear the jersey inside out and have it display a different design and colour created by Justin Bieber’s brand Drew House. But unless the name and numbers are stitched into the jersey, the white outline will not show on the flip side as intended. Most jerseys from Real Sports and the NHL shop are pre-stitched and applied with glue and heat. But again, not in the way, the flip side jersey needs to be. Player names are sewn to nameplates and plates are sewn to the jerseys. Because of this, the name will not show on the flip side. But as Clark told me, he made sure to glue the letters to the plate, stitch the plate down to the jersey and then sew the letters through the plate and jersey. Doing it this way ensures, that the flip side jersey is customized as intended. Letters from the name are not visible on the game worn jerseys, but are visible in the initial design. So technically, there are two correct ways to customize this jersey.

“If I’m working on a 2004 Mats Sundin jersey, I pull up a Mats Sundin 2004 game-worn jersey on my computer, and I make sure that I’m placing it in the exact position as best I can to make sure it replicates that jersey. If I can go a step further and find the stitching pattern, you know, if it’s a wide stitch or a narrower stitch, then I do that, too.”

Small details like that have helped Clark and his business First Line Jerseys gain the reputation within the community he has. Clark has customized over 100 hockey jerseys just four months into 2022. An accomplishment he says is something he never expected but happily welcomes.

But for Clark, it’s about the friends he has made in the hobby and hockey fans he’s been able to connect with.

“I have military contacts and friends that I’ll have forever. And it’s almost the same with this jersey community that I had no idea existed until I started collecting jerseys. it’s almost a brotherhood in itself.”

With the NHL playoffs fast approaching, Clark expects to be very busy.