The Arizona Coyotes are an organization in crisis. Internal reports have revealed a history of corruption within the team’s corporate environment, with charges ranging from nepotism, penny-pinching, and at least one allegation of sexual assault. Recent gaffes included the drafting and subsequent abandonment of Mitchell Miller, a minor leaguer from the North Dakota Fighting Hawks who was previously convicted for racially abusing a disabled black teenager in his home state of Ohio.

The team has faced many difficulties throughout its history. The team is routinely found at the bottom of NHL attendance rankings, a statistic aided by the fact that the team plays within a crowded sports market, competing with the Arizona Cardinals of the NFL, the Phoenix Suns of the NBA, and the Arizona Diamondbacks of the MLB. A shaky ownership history, including the saga faux billionaire con artist William “Boots” Delgado, and a 2009 bankruptcy have also contributed the franchise’s poor image. 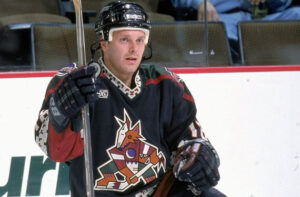 In fact, while we are talking about their bankruptcy, we can also chronicle the saga of “The National Hockey League vs. Jim Balsillie”, and the lengths the league went through to stave off the idea of moving the team to Hamilton, Ontario, despite the proposal being bankrolled by the CEO of tech industry giant Blackberry (known at the time as Research in Motion). The entire affair further entrenched the perception of the league’s commissioner Gary Bettman as an enemy to Canadian hockey fans for his persistence in keeping the Coyotes where they were, along with his unwillingness to consider placing a team north of the border.

With support for the beleaguered franchise reaching its nadir, many are speculating that the league’s 25-year experiment in the desert will soon vanish like a Sonoran mirage. To explain the sheer calamity of the Coyotes franchise, we first need to observe the circumstances that brought the Coyotes to the American southwest in the first place.

It was a quarter century ago when the original iteration of the Winnipeg Jets packed their bags and booked a flight to Phoenix, Arizona, where they would begin play in the 1996-97 season as the Phoenix Coyotes. The move from Winnipeg was the penultimate event in a series of relocations which occurred throughout the 1990s, a decade which was not kind to small markets that were both unable to keep up with rising player salaries or construct brand arenas with revenue generating features like private boxes and club seating.

The National Hockey League itself was in contested period of transition. Traditionalists point to the appointment of NHL Commissioner Gary Bettman in 1992, who displaced President Gil Stein, as a key figure in this period. Between 1991 to 2001, the NHL expanded by 9 teams. A 5-team addition in the first half of the decade saw expansion into markets including San Jose, Anaheim, Ottawa, Tampa Bay, and Miami (Florida). A second expansion in the latter half saw the beginning of the Nashville, Atlanta, and Columbus franchises, with the league also making good on a promise to return hockey to Minnesota after the North Stars departed for Dallas, Texas in 1993.

While the league was expanding, several struggling franchises were forced to sell out to new ownerships intent on moving operations to more potentially lucrative areas. In addition to the Jets and North Stars, Quebec City bid au revoir to the Nordiques when they took a hike to mountainous Denver, Colorado in 1995, and the Hartford Whalers played Brass Bonanza one last time as they were dragged kicking and screaming to Raleigh, Carolina in 1997 (The phrase “Fuck Karmanos” is etched into the soul of every Connecticut hockey fan itching to resume the Battle of New England). Critics of Bettman’s tenure as Commissioner consider this period of aggressive expansion as a downturn in the quality of the on-ice product, due to the watering down of the talent pool and for prioritizing non-traditional territories (namely, warmer southern states) at the expense of traditional areas like Canada and the northern United States.

Minnesota and Winnipeg would both reclaim NHL franchises in the future; Minnesota would welcome the Wild as an expansion team in the 2000-01 season, while a Winnipeg-based ownership group would purchase the inert Atlanta Thrashers franchise and relocate them in time for the 2011-12 season. Hartford and Quebec City are still active in both the minor league and farm team systems – the Hartford Wolf Pack of the AHL still occupy the Whalers old home ice in the XL Center, while the Quebec Remparts of the QMJHL left the Colisee Pepsi behind to occupy the Videotron Centre, the city’s $370 Million ace-in-the-hole for a potential expansion team. While the league passed on previous opportunities to reinstate a club in Quebec City, opting for Las Vegas and Seattle, the situation with Arizona may provide enough incentive for the league to reconsider.

The Coyotes have not been a successful product on ice or in the accounts. In the 23 seasons since leaving Winnipeg, the team has failed to qualify for the playoffs 14 times. When it has, the team has lost in the first round 8 times, with the teams best playoff run taking place in the 2011-12 season, where they reached the Conference finals only to fall to the eventual champion Los Angeles Kings in 5 games. They have never reached the Stanley Cup Finals.

On attendance, the team has never approached 90% capacity at Gila River Arena, which seats 17,125 for hockey. In the past 15 seasons, the Coyotes only averaged more than 15,000 per game at home in the 2005-06 season, dipping to as low as 12,000 just four seasons later. The situation was worse when they spent their first 7 years at Phoenix Suns Arena (then, America West Arena), which was not designed for hockey and was forced to curtail capacity to 16,210 seats, down from 18,000. Not every indoor arena is multipurpose – the sight lines of a basketball only arena are designed around the specifications of a basketball court, which is shorter and narrower than a hockey rink. When a rink is retrofitted into an arena without the necessary floor space, portions of the ice surface are obscured by the overhanging sections of seating. A similar situation occurred during the New York Islanders brief tenure at Barclays Center in Brooklyn, which was only intended to serve the Nets and, again, led to obstructed viewpoints.

While Quebec City has some hurdles to overcome on its own – being an isolated francophone city and lacking an english language television contract (something which played a part in the Montreal Expos packing up for Washington in 2004) – the undeniable passion for hockey in the province and longstanding rivalry with Montreal would insure an instant success should the league award the city another franchise. There has also been speculation of moving the team to Houston, Texas, which previously hosted the Houston Aeros of the AHL (IHL prior to 2001). Hamilton may find it difficult to break into the league as both the Buffalo Sabres and the Toronto Maple Leafs are wary of having a competing club just an hour from their door, Buffalo in particular, as the city’s proximity to the Canadian border has resulted in a large overlap of Southern Ontarians making the drive down to watch hockey games at a large price discrepancy when compared to buying tickets at Scotiabank Arena.

In any case, the constant issues haranguing Arizona, from team morale to fan interest, are drawing an inevitable conclusion to the franchise. While teams like Carolina, Nashville, and Tampa Bay were all able to garner strong fan support and on ice success after years of false starts, the Coyotes have spent 25 trekking the desert in search of an oasis. But as the story in The Athletic has told us, instead of quenching their thirst, they’ve ingested a mouthful of sand.