The rise of social media has increased vastly over the years with a continuous supply of digital apps expanding. Social media has impacted our social life and the way we interact with society everyday. Whether it comes to connecting with friends and family, news updates/information or even finding love online through dating apps. Dating apps such as Tinder, Bumble, Hinge and Grindr have made it seem easier to date and build romantic relationships than ever before. In other words they allow you to connect with potential future partners without having to leave your house and just by a touch of your fingertips. The use of these apps could be arguably even more useful due to the pandemic and lack of human connection. Although the apps may have come in beneficial to some, it has not been the case for a percentage of minorities who have claimed to have had racist experiences with these apps.

Ironically, at a time where the world seems to be getting more progressive with the Black Lives Matter, Me Too and LGBTQIA movements to name a few; Awareness is being vastly raised as people become more sensitized to the values of these organizations. Also lately, the cancel culture has become a social pressure making people alert when it comes to being politically correct and not stepping out of line with their opinions and thoughts. It therefore could be argued that social media and dating apps could be the safe haven to express one’s true feelings and character. It is no phenomenon that people could be cruel on social media because of the safety of hiding behind the keyboard without any real consequences in contrast to face to face discrimination.

It is absurd to claim that dating apps are more racist than in reality because it’s still human beings in the real world involved in these apps. However, it could be pointed out that the racism could be a lot more straightforward and direct rather than subtle microaggressions people of color often face. There is an argument that a lot of times it stems down to racial preference which doesn’t necessarily mean it’s racism. Some individuals don’t indulge in hate speech but they would still rather date within their race for a simple reason such as culture similarities.
Apart from the trendy and popular apps today, we decided to investigate further and look at more vintage dating apps to see if people were influenced by the same racial bias.’ It was clear this issue has been ongoing since dating apps became a thing. It’s also evidently shown according to the data from one of the first dating apps OkCupid (founded in 2004), below.

According to the society pages on OkCupid investigation. 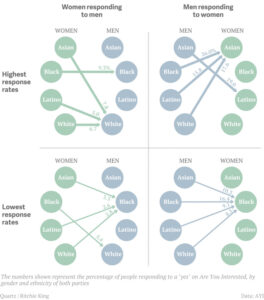 Moreover in conclusion, the real question to be asked is why skin color is so important to individuals? Is it the actual appearance? social stereotypes? Cultural reasons? No one can fully pinpoint one valid answer because human beings think differently to similar issues. When does it become problematic? Where do we draw the line? These are the conversations that need to be had for more inclusive dating platforms and society in general.