The City of Toronto currently has a 627km Bikeway Network that makes biker lovers happy to practice their activity in the city. “I ride mostly in the Toronto core, any and everywhere as far north as Lawrence Avenue and I ride 7 days a week.” Shared Adam, a 32 years old cyclist living in downtown Toronto. 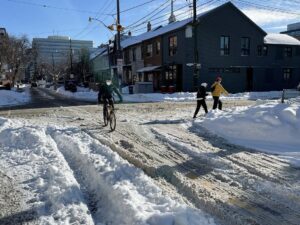 However, it is hard to say that Toronto is the easiest city to practice bikes because of the unpredictable weather in winter. In fact, extreme cold weather has been announced this Tuesday by the government, and “Extreme cold puts everyone at risk,” Environment Canada said. But this prevention seems to not stop Adam “Extreme cold weather isn’t all bad when you have the right clothing and protection. Once you are moving on a bike, your body generates much more heat than if you were walking. The general rule is to have a layer that allows you to sweat, a layer that wicks away that moisture and a layer that blocks out the wind. “. The other challenge that cyclist has to face besides the extreme cold, is the important amount of snowfall that covered the bike lane. 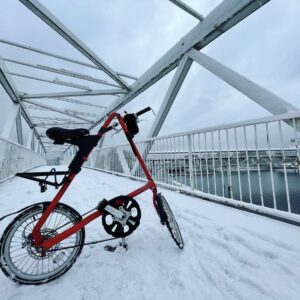 5 to 10 centimeters of snow fell this week and in addition, they are accumulated on the bike lanes when the road is being cleared which makes it impossible for the bicycle to pass. This situation shows the displeasure of some cyclists as for Sean who shared a tweet exposing the situation by posting a picture of the bike Lane situated on College street covered in snow:  https://twitter.com/seankillackey/status/1484074198284881921?cxt=HHwWgsC-kdrnvpgpAAAA