Hypersonic missiles pose a security threat to Northern America, says NORAD Commander General Glen VenHerck, he also mentioned that this makes it very ‘challenging’ to carry out his mission during a tableround media in Ottawa. One day after the successful trial by the Russians, Gen. Glen Vanherck gave officials a ‘candid’ risk assessment about the mission. He added that hypersonic missiles can travel five times the speed of sound. With this technology, it can bob and weave out into the atmosphere and steer clear of interceptions on its way to its target but on the other hand, its manoeuvrability makes it hard to track.

VanHerck’s warning comes just a day after the Russian Navy launched their Zircon Hypersonic missile in the White Sea. This was one of the latest missile tests of the Zircon, which will be in service as of next year. The launch was supervised and approved by Admiral Gorshkov frigate of the Russian Navy.

While most hypersonic vessels can carry only conventional warheads, it is important to keep in mind that they will also have the ability to carry nuclear weapons within years. On Tuesday, during the media roundtable, Gen. Glen VanHerck said that the most important part of his mission is to provide the threat assessments for both Canada and the U.S. as the Commander of North America Aerospace Defense Command.

Gen. Glen VanHerck can confirm that on Tuesday, government officials did not share any policy decision with him, but he mentioned the threats to the Defence Minister, Anita Anand, Chief of Defense Staff, Gen. Wayne Eyre and his vice chief, Lt.-Gen. Frances Allen. Gen. VanHerck said that there is a global race to how to master these weapons and it is magnifying.

The Russian Government confirmed on Monday that after the launch of their missile cruise, it did hit its target about 400-kilometres away. President Joe Biden shared his concerns about Chinese hypersonic weapons, and on the same day the U.S Navy and Army tested some hypersonic prototypes last month. The U.S Gen. Mark. A. Milley, Chairman of the Joint Chief of Staff, said that China has also conducted two hypersonic tests. In his interview with Bloomberg, U.S Gen. Milley called the tests “very significant technological events” and said it came close to a “Sputnik moment”.

Defence Minister Anita Anand’s office clarified that “ Canada and the United States of America coordinate regarding emerging threats to our continent”. NORAD is putting in significant effort and attention in order to mitigate the threat those hypersonic missiles pose. 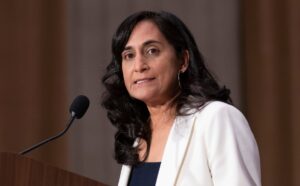 In 2017, Justin Trudeau said that Canada would not change its position on missile defense anytime soon, and Anand’s office also confirmed that this position has not changed on Tuesday. In a media statement, Anand’s Office said Canada designated $169 million in the 2021 budget for the NORAD modernisation program and will be partnering up with the United States.