British MP was reprimanded for bringing her 13 weeks old baby to the house of commons debate.

Labour Party MP Stella Creasy received a letter from the House of Commons telling her she violated the chamber’s rules after appearing in a debate inside the house chamber holding her baby Pip.

The MP took to Twitter and posted the email sent to her, adding

“Mothers in the mother of all parliament are not to be seen or heard it seems….”

Apparently Parliament has written a rule which means I can’t take my well behaved, 3-month old, sleeping baby when I speak in chamber. (Still no rule on wearing masks btw).

Mothers in the mother of all parliament are not to be seen or heard it seems….#21stCenturyCalling pic.twitter.com/rKB7WbYQrL

Previously, Creasy hadn’t faced any problems bringing her daughter or son to the house chamber; however, the rule was changed in September. The rule now states that MPs are not advised to take a seat in the House when accompanied by children.

Creasy said that these rules are not making the parliament family-friendly. She also wrote in an article for the Guardian that this will not only affect MPs but also constituents: “Those who suffer the most are the residents of my Walthamstow constituency – denied a voice in parliament by antiquated rules, met by a tired and frazzled mum in their constituency.”

Creasy received support from many MPs. The deputy prime minister, Dominic Raab, said to the BBC that he had “a lot of sympathy.” Raab also said the profession of MP needed to be “brought into the modern world, the 21st century and can allow parents to juggle the jobs they do with the family time that they need.”

House of Commons speaker Lindsay Hoyle commented on the rule, saying, “The advice given yesterday … correctly reflects the current rules. However, rules have to be seen in context, and they change with the times.” He also added, “We want to make sure that all workplaces are modern, flexible, and fit for parents.”

But Creasy received criticism from other MPs. Conservative MP Scott Benton took to Twitter, saying: “Parents who get paid a fraction of what you do pay for childcare and juggle responsibilities so they can go to work. What makes you so special?”

Speaker Holey asked the Commons procedure committee to review the rule. Holy said, “It is extremely important that parents of babies and young children are able to participate fully in the work of this House,” he said, saying he had been unaware of the advice given to Creasy.

Creasy is not the first MP to bring her baby to the House of Commons. In 2018 Former Liberal Democrat leader Jo Swinson was reportedly the first to do so, but unlike Creasy, Swinson was not reprimanded. 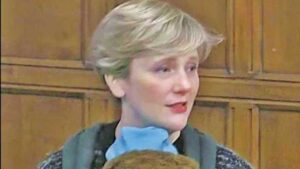