Many in the crowd were holding posters bearing pictures of some of the prisoners who have been practicing hunger strikes fomonths from inside the Israeli prisons. 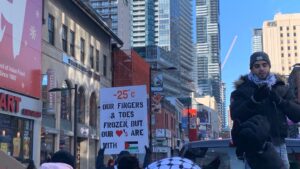 Ahmad Jarrar is one of the organizers of this protest and others that have taken place in Toronto and Montreal. He says he will continue to march in the streets to demand freedom for Palestine. He also offers support for Palestine through his Instagram account.

Protestors in the cold streets of Toronto

Ahmad says: “By doing this is effective and it is reaching the mass public, but it’s up to us to utilize as given momentum and the crowds and the turnouts to actually proceed to actually do some consistent action moving forward.”

“This social media platform is just as a tool to amplify the voices of the oppressed and to continue to create momentum internationally given the fact where I live, I am being represented as the international voice.”

Ahmad Jarrar, voice of the Palestinians

In the following series of graphics, we will describe how many homes were demolished over the years and how many people have been killed by the Israeli forces in 2020 vs 2021 and where the Palestinians are today in the world.

Demolition has been used in an on-again-of fashion by the Israeli government during the second intifada to displace Palestinians from their homes. The largest demolition happened in 2016 when nearly 1200 houses were demolished.

According to the  United Nations…Office for the Coordination of Humanitarian Affairs or  OCHA, the process of demolishing homes has become common in most villages and residential places belonging to the Palestinians in Jerusalem, as the table at the bottom provides us with the names of the areas & the number between the years 2009-2022.

In between the year 2020 vs 2021 many Palestinian women, children and elderly died at the hands of Israeli forces security forces. The numbers have been increasing. Even though 2021 has been a deadly year for Palestinians, the Israeli Forces are not backing down, not even 2 months into this new year and 30 Palestinians have already been killed in incidents involving the security forces.

Since 1948 Palestinian exodus occurred when more than 700,000 Palestinian Arabs were expelled from their homes, during the 1948 Nakba Palestinians were everywhere in the world.

Ahmad says: “We are now in the year of 2022 we can do something and if the official’s media platforms turned their blind eye on this cause we will be the ones who actually continue to speak about this.”

The lives of the Palestinians are in the hands of those who are not afraid to speak up for their country and believe a change is possible.

This is the link to our interview: