Canada’s inflation rate has increased to 8.1% since June 2022 and many Canadians are feeling it.

Why does this matter? Inflation reduces the dollar’s values and reduces its purchasing power, making everyday necessities such as groceries more expensive for individuals to buy. It’s not just groceries either – there has been significant change in the price for oil, gas, wheat, clothing, and many more. The increased cost of living isn’t accompanied by salary adjustments either. In fact, the unemployment rate is set to increase as the Canadian economy braces for a recession..  The economic crisis is having a significant impact on everyone but especially on low-income families. This places increased pressure on the younger population who can be influenced by changes in financial factors such as labour demand. Canadian youth suffer greatly in the employment market during economic crises, and they are especially at risk of unemployment. and they are frequently obliged to work in the informal sector, where pay and working conditions are extremely low and there are few barriers to protection rights.

Figure 1 – Average Inflation Rate over the past 5 years

A leading factor of the economic downturn has been the Covid-19 pandemic. Things got so bad that the Canadian government introduced relief payments to help increase spending in an attempt to stimulate the economy. The lack of demand during the pandemic forced businesses to decrease capacity, meaning the infrastructure is now playing catch-up as demand picks up back to pre-pandemic levels. Things are playing out exactly as the free market demand and supply model dictates, that prices for goods will increase in such a situation. 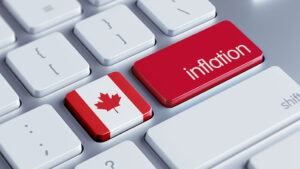 The Impact of the Ukraine War on Canada’s Economy

Additionally, the war has increased food prices for Canadians as Russia is a major supplier of coal, oil and gas, grains, and oil in the world. Canadians now pay more for their food as a result of the conflict. Ukraine is a significant exporter of grains like wheat and corn to other countries. 25% of the world’s wheat supply comes from Russia and Ukraine, however, because of the conflict, transporting these goods becomes impossible. Meaning that Ukraine is not able to be operational in the exportations and importations of products at this time as a result of the recent Russian attacks on Ukraine. Canada has experienced direct effects, leading to higher food costs. In the end, the increase in food costs has resulted in inflation and rate increases. Canada has suffered as a result of this war.

Gas Prices On The Rise

Gas costs have risen by more than 50% when compared to last year, as reported by the CBC. Commuting has become more expensive for Canadians, eating away at their budget for other necessary items. Due to the increased demand for gas and the constrained supply, costs are on the rise to record levels. Millions of Canadians typically suffer financially as a result of this. In the end, all of these factors have had a major and detrimental impact on Canada’s economic situation, and inflation has significantly increased. Many people such as  Students, low-income families, and families with children have all been affected by this rise have been affected by this surge.

First most essential one is oil, and how Russia pumps 10% of the world’s daily supply of crude oil. Before the pandemic, Canada used to import $550 million barrels of Russian oil a year, which signifies the amount of money Canada has sent to Russia. A day after Russia invaded Ukraine, the world stock markets suddenly dropped while the price of food, fuel, oil, and gas increased. Additionally, Russia has severely reduced gas deliveries to Europe. They declared that they would stop exports to Europe until European sanctions against Russia were lifted. Price hikes for fuel will follow the increase in demand and those with supply can stand to benefit.

Oil firms’ earnings are also rising alongside gas prices – “Shell’s last quarter revenues tripled compared to the same period last year, raking in $9.1 billion.” The few large oil conglomerates are taking advantage of the situation and padding their pockets as the Canadian government watches on.

The cost of fuel is influenced by taxes as well. The federal carbon tax adds about 11 cents to the price of each litre of gasoline. According to estimations, the federal carbon price would rise until it hits about $170 per ton by 2030.Canadians, particularly students and young people, may suffer significantly because of inflation in their financial situation. This will help the audience be aware, make decisions based on how they spend their money, and effectively look out for the recession. Furthermore, it will enable the audience to make decisions for others, for example, it will enable people to be aware of the conditions in which people living in poverty live, as well as to donate and be aware of the community.

Ontario is going into a recession, and living in these harsh conditions is difficult, especially for families who are living in poverty. This story is typical as it reveals how the average student’s life changes as an outcome of fluctuating living conditions and costs of living in Ontario due to the recession. The interest level is gradually increasing with every day that passes, as more and more people are being impacted. What is happening right now in Canadian society gives other citizens a deeper insight into issues impacting our society.

After researching and speaking to different people it was evident that inflation has had a dire impact on each of their lives in their own ways. The students said the price for everything has changed since last year, and inflation continues to have an impact on their daily lives. Also, Angela Marquez, who works at the Canada Food Bank and provides financial assistance, says the food bank expressed concern about the way Canadian food banks are warning of excessive attendance. Also, the number of Canadians applying to food banks has reached an all-time high, surpassing that of 2020.

Figure 3 – change in food bank visitors by province from 2021 to 2022, indicated as a percentage point

Peak inflation rates in Canada are causing an increase in the cost of living, making it difficult for many Canadians to afford essentials such as gas and food. With nearly stagnant wages, the future outlook is not too bright.