Hello everyone, and welcome to The Crime Times; this week will be a bit different, Sarah and I have put together an article about Kartik Vasudev, a 21-year-old international student from Ghaziabad, India. We wish this article were under better circumstances, but unfortunately, Seneca lost a student, and students have lost a classmate.

On April 07, 2022, Kartik Vasudev was senselessly murdered in a shooting outside Sherbourne station around 5 pm. He was traveling to his part-time job, which his brother Patrth Vasudev said just gave him the money to buy his brand new phone.

Kartik came to Canada for a chance at a better life and career. He came only this past January to study Global Business Management at Seneca College.

“He just wanted to have a good lifestyle and travel the world,” Parth explains, adding that his brother Kartik loved photography and videography, a hobby he picked up on. According to Parth, Kartik would spend his time sending photos to him and his parents, Jitesh Vasudev (father) and Pooja Vasudev (mother).

“Every day, he even tells me what he was having for breakfast, lunch, and dinner. Always used to send Mom, Dad, [and] me photos… [of] what he was wearing, everything.”

The last time Pooja Vasudev heard his sons voice it was when he told he was leaving for work.

On April 10, a vigil was held in Nathan Phillips Square to honour the life of Kartik Vasudev. Furthermore, 1000s gathered outside Kartik’s high school in India to protest for his justice.

Senecas President of 13 years, David Agnew, says what happened to Kartik was rare and ultimately tragic. Agnew attended the vigil and service held for Kartik and spoke to everyone in attendance but says he was mainly speaking to Kartiks parents. “He is the son that we all want. I am not just terribly sorry, but I am deeply ashamed that this happened in this country.”

Agnew says the service and vigil went well, “I think they were very nice in the sense that you know, as I say, they gave an opportunity for students and faculty members, students from other institutions, members of the Indo Canadian community and others to come together to, pay their respects, to send a message, particularly to his parents and his brother and his extended family and friends back in India that his death you know, saddened us all.”

Richard Jonathan Edwin, 39, has been arrested and accused of shooting Kartik Vasudev six to seven times. But Edwin is accused of committing another tragic shooting only two days later, killing Elijah Eleazar Mahepath, 35. Edwin shot Mahepath several times near the intersection of Dundas Street East and George Street around 7 pm. Mahepath was rushed to the hospital, where he succumbed to his injuries a few hours later. 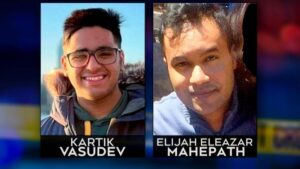 When police arrested Edwin, they allegedly found a stash of guns.  Detectives claimed catching him now saved another person’s life. The police have also said both murders were random shootings, but Parth Vasudev disagrees.

“I do not think it is a random act of violence it’s- how- you tell me, how can someone kill randomly? How can someone randomly kill two innocent people?”

Kartik’s family has been all over social media and the news demanding justice from Prime Minister Justin Trudeau and all of Canada. When asked what justice for Kartik meant to Parth and his family, Parth emphasizes, “Justice for Kartik is that person who killed him needs to get the punishment he should get for killing two innocent people within three [two] days.”

President Agnew wants to stress that Canada remains to be a safe country, this was a rare occurrence that should not have happened. “People, have a right to expect that when they, send their children here, or when they raise their children here [they will be safe].”

When Sarah and I reached out to Toronto’s Homicide department, they replied that they could not comment on the case as it is still ongoing.

Currently, Edwin has been charged with two counts of first-degree murder for the fatal shootings of Kartik Vasudev and Elijah Eleazar Mahepath.

Kartik’s remains were sent to his hometown in India, where he was cremated, and a burial was held for him. He leaves behind a loving brother, mother, and father.

Kartik will remain in our hearts here at Seneca, this was a tragic event that never should have happened, and like President Agnew, we are ashamed this happened in our city and country. Our deepest condolences go to his family and friends in India.

We want to thank Parth Vasudev, President David Agnew, and the Toronto Homicide Department for their time and answers; we appreciate it.

We want to leave you with something we feel is important that President Agnew said, “Don’t let the bad guys win. Don’t let, the mad acts of a handful of people across the span of time cow us and keep us from enjoying a full and rich life.”

To keep up to date with news on Kartik Vasudev, his family, and his case, please follow the Instagram run by his father and brother:@justiceforkartik

Above is our podcast and interview with Parth Vasudev

Above is our interview with Seneca’s President David Agnew

Thanks for listening and we will see you for the next one,