Scott Arsenault, a human with a huge heart and a give-back attitude has a strong passion for helping animals in need, ensuring animals live the longest life they possibly can, and works with communities to make it all happen. Arsenault took a passion for helping others and animals and began channeling and processing ideas that would help him do both.

It wouldn’t be before long that he would stumble across a small mom-and-pop-owned pet store called Ren’s Pets. Arsenault knew that this would be the start of a new journey that would help him fulfill his passion. 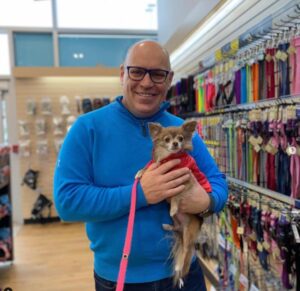 In February of 2012, Arsenault joined the team as Vice President of Sales and Operations but quickly wanted to implement his ideas that would later be called the core values: passionate about pets and the people they own, believing in the highest nutrition for pets and committed to bettering communities.

“We’re here for your pet’s best life,” a philosophy that he and everyone else in the company now follows. Arsenault believes in working with your community energy. That a group can work together more efficiently rather than one person trying to take on everything themselves.

Arsenault took these values and philosophy and applied them to Ren’s Pets and created a one of a kind pet store that works with communities such as shelters, adoption agencies, and humane societies that helps animals in getting food, finding a forever home, and donations to help keep the animals from being euthanized.

Arsenault and Ren’s just opened a new location in Orillia, and he speaks about the turnout of just over 400 people showing up on the opening day and how successful it was “but most important, we had a rescue there.”

As a community itself, Ren’s treats shelters, adoption agencies, and humane societies in the highest regard with the work they do. It’s a staple for the company to make sure that the stores they have across Canada work with their local pet rescues to help spread awareness about pets that are in need. Ren’s is also a national supporter of the OVC Pet Trust, Canada’s first charitable fund that benefits the health of companion animals.

These rescues team up with their local Ren’s to host in-store sessions that help fundraise for these pets that could potentially find a forever home, a foster home, and stop from being euthanized. The incredible work that was put forward to make this happen has saved countless pets over the last 10 years.

Ren’s doesn’t only help local communities. With the devastation that is affecting Ukraine, Ren’s and its parent company, Mondou, took the initiative to put their best foot forward to help Ukraine in its time of need.

With donating a combined total of $150,000 to the Red Cross, it was just the start as Ren’s had all their stores do not only one, but two different events to donate money to help aid Ukraine. Holding raffles for shoppers who want to help aid support in Ukraine helped raise nearly $27,000 in addition to what was already donated.

These donations were split among separate groups that helped aid people and pets in Ukraine, such as Planting Peace, Breaking the Chains, and refugees of Ukraine who are entering Canada.

Arsenault is remarkable in the positive, infectious, never give up attitude he brings. He is the heart and soul of Ren’s and is the reason why so many of these great things have been able to happen. Standing with his team and creating a new way to work with community, rescues, and partners, Arsenault and the rest of his family as Ren’s have made it possible for so many animals to be helped and saved.

While Arsenault is helping out those in need with Ren’s, he is also making sure they are being part of the community in their own backyard. If you’re a fan of hockey, which you may be living in Canada, Ren’s and Arsenault stand with that Canadian background. 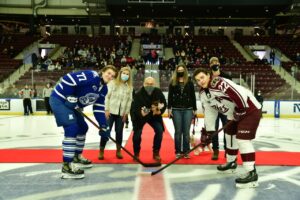 Junior Ice Hockey team the Mississauga Steelheads hold an annual event call Pucks N’ Paws, and what better way to collaborate than with Canada’s own Ren’s Pets. Arsenault, being a fan of the sport and an obvious huge lover of pets, made the most when he got together with the Steelheads to be a partner with the event just a couple of weeks ago.

Arsenault, who is pictured in the middle of everyone, has a puck in one hand and his dog in the other. A great way to support the community, build partnerships and do it through Canadian roots.

I spoke with Scott about his journey and why he does what he does, the podcast can be heard below.