The Semi-Final schedule is set to kickoff on Sunday when the Hamilton Tiger-Cats host the Montreal Alouettes at Tim Hortons Field beginning at 1 pm est. https://www.cfl.ca/2021/11/19/matchups-set-108th-grey-cup-playoffs-ready-kickoff/

These teams faced off twice in the regular season splitting both games with each team winning in the other’s stadium. Montreal came out on top in the week 9 matchup in Hamilton 23-20 in overtime. There is little playoff coaching experience for the East Semi-Final as Orlondo Steinauer and Khari Jones combine for a record of just 1 win and 2 losses in their tenures as respective head coaches. There is no lack of confidence for the perceived underdogs as Alouettes Linebacker Patrick Levels gave the Ti-Cats some bulletin board material as he told the Montreal Gazette “We will win in Hamilton. Put it as big as you need to put it. Black it out. We coming. The Montreal Alouettes. See you soon. I don’t care about the regular season anymore. Everybody’s 0-0. Get ready for a show.” Montreal won 5 of their final 8 eight games but did lose to the last place Ottawa Redblacks in the season finale squandering an 18-3 halftime lead. Hamilton finished the season with a 24-3 win against the shorthanded Saskatchewan Roughriders. 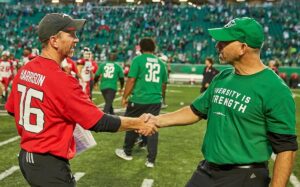 Later in the afternoon, the West Semi-Final kicks off between the Calgary Stampeders and Saskatchewan Roughriders at Mosaic Stadium in Regina. This will be a family affair as brothers and head coaches Craig and Dave Dickenson will be facing off for the first time in the postseason. This year younger brother Dave’s Stampeders have the upper hand taking 2 out of the 3 matchups in the regular season. Including the one matchup in Regina by a final score of 22-19. Although Craig’s Roughriders did take the final matchup of the season in week 12, 20-17. The Stamps will look to ride the pedigree of Quarterback Bo Levi Mitchell who has been with the franchise since 2012 racking up 2 Most Outstanding Player Awards along with 2 Grey Cup Championships, the only quarterback to do so in Calgary. While the Riders have a current nominee for the most outstanding player as their signal-caller in Cody Fajardo. Fajardo threw for 2970 yards along with 14 touchdowns finishing 2nd in the league in both categories. He added 468 yards and 4 touchdowns rushing.

The winners of the semi-final will travel to Toronto and Winnipeg respectively on December 5th with the chance to earn their way to Hamilton for the Grey Cup. The Argonauts are led by journeyman QB McLeod Bethel-Thompson who led the Boatmen to a 6-1 record at BMO. The only loss for the Argos was a meaningless season finale loss to Edmonton when they had the majority of their backups play. The Blue Bombers have not played a meaningful game since October 23rd when they clinched the West Division title with a 45-0 win against the B.C Lions. The Bombers are technically the defending champions claiming the 2019 title. The Grey Cup will be played on December 12th at Tim Hortons Field in Hamilton.