Denise Angus is a dog lover who lost her dog, Mattie a few years ago.  She used the enormous sadness she felt  and  founded  Mattie’s Place creating a community on beaches Toronto, where she was able to help more dogs in difficult situations.“I have been doing rescue for many years, also been helping people with their medical bills, supplying all of our local food banks with food. And when Mattie passed away there was an incredible hole in my heart.”

“Mattie, she passed away a few years ago, I have been doing rescue for many years, also been helping people with their medical bills, supplying all of our local food banks with food. And when Mattie passed away there was an incredible hole in my heart.”

Mattie’s Place was Born in Honour of Mattie.

Denise says that when the space for Mattie’s Place became available, that’s when she decided to make it an official rescue center.

“When this space became available, I thought it was time to make official our rescue efforts, our community efforts, our pet food bank efforts and so Mattie’s place was born in honor of Mattie”

Denise helps many pet owners afford medicines and treatments. In addition to her work apart from directing Mattie’s place, Denise dedicates her time to rescuing pets from Toronto, as well as from different provinces in Canada and even different countries, such as the United States, Dominican Republic, Colombia, and Mexico among others.

Among all the stories that Denise has managed to change is the story of Fox.  Fox was a Manitoba dog that was run over and seriously injured. Her owners could not afford the operations she needed so they decided to leave Fox in the hands of Mattie’s Place.

Her story begins when Fox embarks on her journey to Toronto on October 10 in which thanks to the help of Kelsey, his flight companion can reach the care of his new foster family, Tracy where he would stay 6 weeks waiting to receive treatment for his paw.

Soon it was time came for Fox to embark on a new road trip to Thornbury, Ontario where Dr. Justin Levy, was waiting for her to undergo surgery and begin her healing process. Dr. Levy, who has worked with Mattie’s place before, explained to us that“Fox has broken her Tibia after being hit by a car. And the type of fracture she has is like a spiral run around her tibia. If we don’t fix it with some implants, the problem is if she tries to walk, the pressure when it comes up through her leg will compress the spiral and shorten her tibia.”

After a detailed examination, Fox’s story took a dramatic turn when Dr. Levy said Fox was already halfway through recovery.

“It’s already stable, this bone is out of her way and it’s stable. With rest, it will heal up. And for me to go in there for what, to try and link them to by one centimeter. I am going to cause more harm than good, it’s not fair on her.”Denise Angus was cheerful, for the news received. This news means that Fox is now ready to enter the adoption process. And so, it was just two weeks later Fox found her forever family. 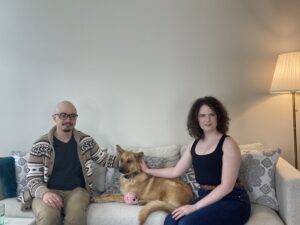 Lorenzo de Sequera and Julia Henderson, who after seeing everything Fox had been through, decided to make her part of their family.

“It was just her face and I was like oh my god, you can tell how sweet she was and click on the profile read all about her background story and like for me I was like really feeling for this dog and see how good she was.”

They made the application for Fox and went to an interview by phone with Denise followed by a home tour. After that, it was the meet and greet. In the end, they took Fox home.

Lorenzo said, “I did find it good that she challenged us to find out if we were the right people for fox and if we were ready for the responsibility of another life.”

Great Ending for a Happy Tail

Like many dogs that pass through Mattie’s Place, Fox found a family and is now living her happy ending.