Trauma in the workplace is something that is usually overlooked since, in the jobs that it comes with, the employees are expected to push through traumatic environments to achieve the desired results even if at times their lives are in danger. People working as soldiers, police officers, firefighters, nurses, or ambulance personnel are at very high risks of suffering from PTSD  due to traumatic events at work, but these specific individuals have all made pledges to do their jobs and protect others, no matter the circumstances, knowing that they could go through a lot at any given time. But think about the horrible things that first responders have seen, such as 09//11 and other terrorist attacks, or what soldiers have seen in wars in Vietnam, Afghanistan, Syria, and so on.

Events like these, and even smaller ones like deadly car crashes, or fires, are all transmitted to society through the news. The Vietnam war became the first war to be transmitted on live television in 1965, and there were people in the middle of battlefields and warzones who were simply there to take pictures and report on what was happening. 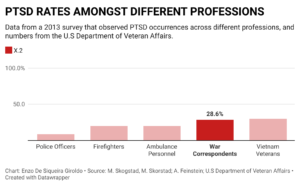 Those were war reporters, and they actually have almost the same rates of PTSD (28.6%) as Vietnam veterans (30%), the problem is just that with journalists, this issue is not addressed, and at times it is ignored because they’re afraid of losing their jobs. David Handschuh, a 09/11 survivor and photographer, was one of the first people to look at how trauma impacts photojournalists, and whether they report these situations.

Although the results of his 2003 survey were expected, especially from the ones working in the field, the study was still ground-breaking because it was the first time someone had looked at photojournalists and trauma. The survey was conducted with 875 current and former photojournalists, and questions were asked about PTSD; exposure to trauma outside of work; whether they talked to therapists or used counselling services; and exposure to trauma while at work.  The results were overwhelming, as it revealed that over 98% of respondents worked in assignments where people were killed or injured. Although 84% reported having discussed “emotional-responses” to their assignments with friends and family, only 25% of news organizations employing the respondents offered counselling to their employees. 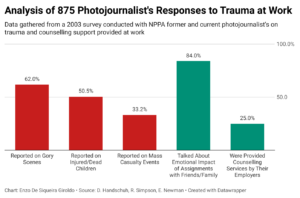 Taking a look at data from other surveys, the story behind high instances of trauma with photojournalists start piecing together with the low rates of reported incidents, and the little support available for these professionals. A 2018 survey conducted with 41 journalism schools in the U.S found that only one of those provided trauma training for their students 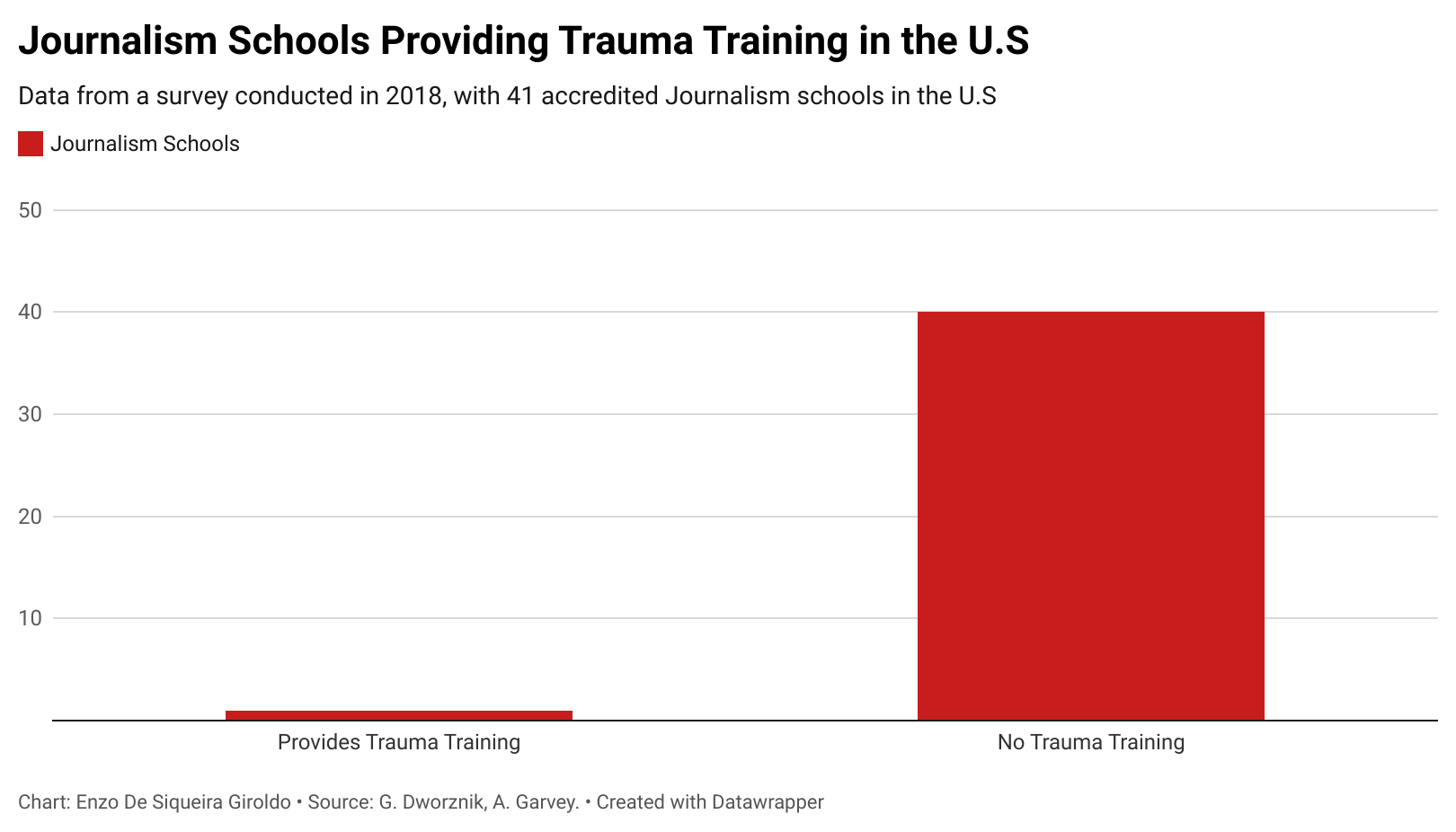 . On another hand, David’s survey also found that of the 98% of photojournalists that reported working on stories involving injured or killed people, only 11% were told by their employers that their job could affect their mental health.

The data shows a really large gap in how common trauma is for photojournalists compared to the support offered to them, but considering how competitive the industry is, and the nature of journalism itself, photographers and journalists tend to go really far for a story, even if it means being kidnapped by terrorists, or to witness a murder during a protest, so this culture is a driving factor for how the news industry and journalism schools see the issue.

“There is no health insurance in the US, there is no emotional support system in place, it really falls upon journalists to look after other journalists.”