Seneca College has spent the last two weeks setting up monitors for students to watch the 2022 World Cup.  This event brings 32 countries together and Seneca College brings thousands of international students across campus, the two have more in common than you think. So why is it this year students seem to be uninterested? 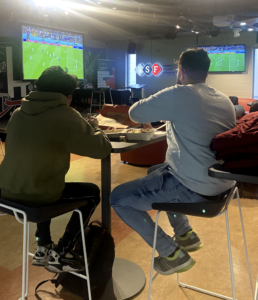 Students who we spoke with seem to have little interest or knowledge at all about The World Cup. Most agreed they aren’t actively watching but keeping their national teams in mind.

“I don’t know much about World Cup. I don’t follow football that much but just this time. We are showing it at the campus so I feel that’s fun, right now I root for Korea.” says Joao da Silva, a animation student.

Seneca College has decorated the Hive with flags representing each team. Games are being broadcast live across the school for students to watch. Accessibility and outreach doesn’t seem to be the issue but a lack of interest amongst the students could be why less are watching.

Due to Qatar’s climate, the traditional June to July event had to be moved to the fall season.

Interfering with end of a student’s semester, many don’t have the time to watch like they would’ve in the summer. If you’re a student who is feeling overwhelmed, come check out the Hive and unwind to a World Cup game.